The two Republican candidates for Montezuma County sheriff in the Aug. 10 primary have quite a bit in common: Both have more than two decades of law-enforcement experience, both advocate the fair and impartial enforcement of our laws, both have managed or are currently managing small businesses and both believe they know who would make the better sheriff. The following interviews with the Free Press conducted last week may help voters answer that question for themselves.

July 12 is the last day to register to vote or to change one’s party affiliation to vote in the primary. That can be done at the county clerk’s office or at www.govotecolorado.com 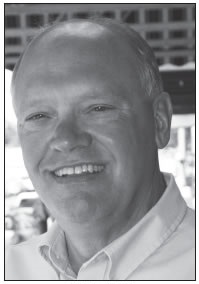 David Hart, 57, was Montezuma County undersheriff for the past five years until he decided to run for his boss’s job after Sheriff Gerald Wallace made the somewhat surprising announcement that he would not run for a third term.

Wallace had been elected by huge margins in both the primary and general elections in 2006 and was considered a shoo-in had he chosen to seek a third term. Instead, he has endorsed Hart as his successor and said he would be willing to continue in the role of undersheriff for a year to assure a smooth transition should Hart win election.

Under federal law Hart could no longer continue as undersheriff during his campaign, but still works in the office as public information officer.

Hart said aspiring to be sheriff is a culmination of his life’s work to this point.

“During my time in law enforcement, I held all the ranks: patrol deputy, patrol sergeant, patrol lieutenant, undersheriff — so it’s been a natural progression,” he said. “The only level left is sheriff.”

He said 11 of his 23 years in law enforcement have been in “command positions overseeing a large part of the organization.” In addition to management skills, he has experience handling a budget.

“Five of those years I’ve been undersheriff and previous to that I had 15 years of business management, so I have a combination of business skills. I ran a hardware store – I managed hundreds of thousands of dollars of inventory and the employees.”

“I believe that a sheriff must be a leader of the community, and I am very much a part of the community,” he said. He has served on the board of directors for the Pinon Project the last five years, two of those years as president, and is currently vice president of the Character Council.

“I believe as the sheriff, you need to show that type of leadership outside of your role as a law enforcement officer – actually peace officer is the correct term – by being involved in the community in ways that have to do with developing character in the community with young kids and so on.”

Working with kids is important because juvenile crime is a large concern, Hart said, although it involves a small minority of kids.

“I was a school resource officer in Dolores School District, and the ones that get themselves in trouble tend to be the ones with basic character issues, a lack of respect, sometimes a lack of understanding of the pain they cause others, and you can’t teach that in school.”

For all those reasons, he said parenting is “huge.” “It doesn’t mean that, because a kid gets in trouble, the parent did a bad job but your odds go up,” he said.

Hart said the county has a variety of crime problems.

“There are a variety of issues, some of them drug and alcohol – not just drugs, not just meth. Meth is certainly an issue; however, in the community I came from, our meth problem was much worse.

“It’s absolutely a problem here, but there was crime before meth. You don’t want to get locked in on meth. Certainly alcohol is a problem – underage drinking and certainly DUI are very big problems.”

In addition, substance abuse leads to other crimes, such as domestic violence and child abuse, he said.

” I think those are actually the two worst crime problems we have in the county — without the alcohol and the drugs, you’d certainly have domestic violence, but inhibitions released by the substance abuse cause things to happen that wouldn’t normally happen.”

“One of the toughest things about the sheriff ‘s office is that you have to run the jail, and the bulk of the turnover is in the jail,” he said. “The jail is a tough place to work, very stressful. Last year we did lose several people in the jail and in operations, which is the patrol and detectives.

“The year before, we only lost three people in operations; the rest of them were all jail (deputies).

And often people leave when presented with better job opportunities, he said.

“Last year we lost nine in operations; however, all of them had extremely good reasons. Most were leaving for better money.” A couple were asked to leave because they just could not fit into the system, he said.

“One who left last year just came back to work for us last week and one of them went to the FBI because that is what his lifelong dream was,” Hart said.

“We have not lost an officer out of the operations division for nine months. We did lose one that got called up on reserve to Afghanistan, but that’s it. And we have not lost anybody to Cortez Police Department for at least four years.”

Wages have been increased and deputies added as a result of a mill levy passed three years ago for a rural Law Enforcement Authority, and this is beginning to have a positive effect on retention, Hart said.

But the sheriff ‘s office faces another budget challenge: the end of a 0.45-cent county-wide sales tax that was passed a decade ago to build a new jail.

“That sunset will take $330,000 or $350,000 annually out of the jail operations budget and that will be devastating. I think the community is going to have to look at that down the road.”

The detention center is already overcrowded, Hart said. “I think our population today was 117 and it’s supposed to hold 104. At times we have been at 143.”

In order to reduce the jail population and the rate of recidivism, new programs are being instituted through grants, he said.

“We have had to be very proactive. We have a grant for the first two years of a screening program. Everyone who comes into the jail now goes through an extensive screening process to see what is the actual underlying cause of that person being there. Is it emotional, is it mental issues, is it drugs, is it alcohol? We then try to hook those people up with the appropriate agencies when they come out of the jail.

“We’re also helping them get lined up to get their GEDs” so they can later find employment. “The purpose is to cut the recidivism rate, which helps the community at large and is good for the person.”

Hart believes the War on Drugs is not winnable but it has to be fought.

“As a society, if we’re going to say these drugs are OK, we would be giving credibility to products that are not only harmful to the persons themselves but to society because of the crimes that they do cause people, or at least lead people to commit.”

But he said busting addicts for simple possession can miss the larger target.

“Our concentration, and that of the drug task force, is always on dealers, not users. Most of the people in jail for drug crimes aren’t there for just possession but for another crime where drugs played a part.”

Hart was hesitant to criticize Spruell, but did contrast their experience in running a large organization.

Spruell, he said, “doesn’t have the command background. And one of the biggest things is there is no experience running the jail. The jail is probably the toughest part of the sheriff ‘s office to manage. So that’s just our difference in background, not a difference in ability.”

“Too often law enforcement is locked in to just locking people up. The truth is, law enforcement’s priority has to be the community and the victims. When you get into the mentality of just locking people up, you are neglecting your priority. If you’re going to give somebody a pat on the back, it should be for having the character to go out and do the job well, even if they didn’t make an arrest.

“The truth is we are peace officers and we need to be out there protecting the people, protecting their rights. When we wrote our core values, one of the things we looked at was it’s not just upholding the law, but upholding the Constitution for the officer on the street, the Bill of Rights. That is crucial.

“The important thing is that we’re protecting the community and we don’t get caught up in the idea, ‘I have to get this guy, I have to get him right now’ — that’s when you start violating rights.

“The sheriff has to truly care about the people he serves — be fair with those citizens — and you have to be very firm in your administration of the sheriff ‘s office. Our credo is ‘commitment to community’ and that’s certainly going to continue.”