How to manage Colorado’s roadless areas?

On Wednesday, June 8, Southwest Colorado residents will get a chance to study and respond to the Proposed Colorado Roadless Rule, the latest effort in a decade of attempts to decide the fate of forested land in Colorado that doesn’t yet support roads.

Roadless areas are so treasured across the state – and elicit so much passion – that this is the third version of a plan to protect them. All of the others have failed amid opposition by the various groups that either want to protect the land, or wish to be able to use it – or both. 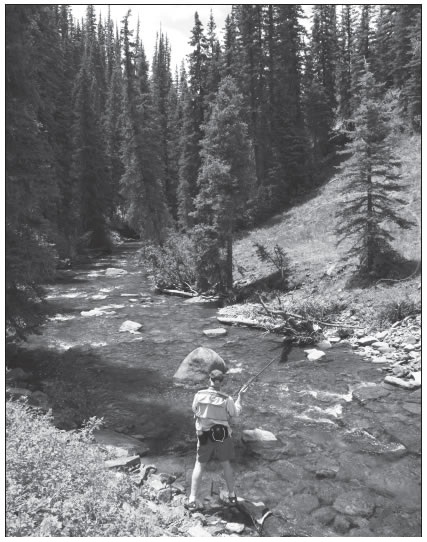 An angler tries his luck on Hermosa Creek north of Durango, Colo. The Hermosa Creek area, managed by the U.S. Forest Service, contains the largest inventoried roadless area in Colorado. Most of it lies within the USFS 2001 Roadless Rule boundaries and is managed under this rule. A plan to create a 148,000-acre special management area around Hermosa Creek, including 50,000 acres of wilderness and some additional roadless but non-wilderness acreage, is being supported by Sen. Michael Bennet. Photo by Wendy Mimiaga

But now, officials with the Forest Service hope they’re close to striking a balance, and protecting the state’s roadless areas in a way that allows sufficient flexibility to allow their use but enough restrictions to protect them.

Back to the drawing board

While efforts to inventory the country’s roadless areas – including Colorado’s – date to the 1970s, the Clinton-era roadless rule of 2001 took the process to a whole new level. That rule would have set aside 58 million acres of Forest Service land across the country, including 4.2 million acres in Colorado.

Amid multiple court challenges to the Clinton rule, the Bush administration opened the door for states to draft their own roadless-area plans. Only Colorado and Idaho took up the task. The courts remain divided about the legality of the 2001 rule, and there is a hodgepodge of roadless-area management strategies across the country.

Meanwhile, Colorado drafted its own plan in 2005 and 2006, and Gov. Bill Ritter’s administration, in cooperation with the Forest Service, brought it to the public in 2008. But that plan went back to the drawing board after the Forest Service received 22,000 written comments, many of them form letters generated by interest groups.

For example, “We had concerns from recreation groups and the ski industry,” said Rick Cables, the agency’s Rocky Mountain regional forester. “We had concerns about effects on coal-mining; we have to find a way to ventilate the mines. That means poking holes in the surface to allow ventilation.” The Forest Service also heard from numerous environmental groups with a variety of concerns about wildlife.

Significant natural insults have also hit the forests since 2001, including 4 million new acres statewide ravaged by beetle kills, and two of the largest forest fires in the state’s history: the 80,000-acre Missionary Ridge Fire near Durango in 2002 and the Hayman Fire, which burned more than 130,000 acres south of Denver that same year.

Cables said the general feedback from the public leading up to the 2008 plan was that “there wasn’t enough flexibility in 2001 to allow us to do some protection.”

But then, some critics of the 2008 plan thought it went too far.

“In the 2008 proposal, we allowed too much to occur,” said Ken Tu, team leader for the Forest Service on the roadless rule. “We tightened that up quite a bit and limited it to communities at risk.”

As for wildlife concerns, “I think the current draft is tighter on protections for most everything,” Cables said. “And yet, I believe it’s a contemporary rule in that it acknowledges a lot has changed since 2001.”

The revised draft issued in April of this year spells out more restrictions, putting about 540,000 acres into a special “upper-tier” designation with prohibitions against most roads, and the remaining 3.6 million acres into a category where some limited development, especially for energy infrastructure, could proceed.

The Forest Service, according to the National Environmental Policy Act, must evaluate several different alternatives for a given decision on the land in a document called an Environmental Impact Statement. In this case, the first alternative is to go back to the Clinton-era rule that protects all of Colorado’s inventoried roadless areas. They encompass 363 separate roadless areas totaling nearly 4.2 million acres, about 29 percent of Forest Service lands in Colorado.

That alternative is a favorite among some environmental groups, but least preferred by industry.

Colorado’s plan is listed as the second alternative, and the one preferred by the Forest Service.

Cables says the preferred alternative allows for roadless protection with “some nuances, things about Colorado that are a little different.” For example, 8,300 acres would be removed from road prohibitions for ski permits.

“It’s a reasonable shift, I think, in recognizing the importance of the ski industry in Colorado.”

The third alternative would scrap any overarching roadless rule for the state, allowing each forest to manage its own road-less areas. The fourth alternative would be the state’s plan with an additional 2.6 million acres designated as upper-tier roadless land deserving of the highest level of protection. It is garnering the support of conservation groups, especially those whose memberships comprise hunters and fishermen.

“They’ve adopted the places in each forest plan where they were already going to prohibit road-building anyway,” he said. “It’s not protective of the key habitat.”

“To me it becomes really clear that the remaining roadless areas are really basic to conserving those populations,” he said.

Kindle points out that hunting, fishing and wildlife-viewing contribute nearly $2 billion and over 20,000 jobs annually to Colorado’s economy, citing figures from the Colorado Division of Wildlife’s last assessment in 2008.

Trout Unlimited and some of its partner groups, which also include sportsmen’s organizations concerned with elk habitat, are pushing for alternative four because of the additional habitat it would protect. They’re also encouraging the Forest Service to tighten up protections for lands designated in the upper tier. Right now, those lands could still be subject to some road-building for energy development, among other specified uses.

“Energy development is the big thing we’re seeing on the horizon,” Kindle said. “We’re looking into the future, what could happen as the value of energy fluctuates, the value of timber. Until we get something that’s pretty solidified, it’ll always be a threat out there.”

So far, the new draft has been well received in public meetings around the state, Cables said: “It feels like we’re getting a lot closer to the sweet spot.”

For instance, in 2008, when the Forest Service conducted its public meetings about the plan, opposition groups were setting up concurrent meetings in rooms next door. This time around, that’s not happening, he said. And he’s optimistic that, although the details might change, the process will yield a plan that’s palatable to the majority of interested people – and protective of the forest.

“We have an opportunity to lock down protections on about 4.2 million acres,” he said. “I’d love to see us get these acres locked down and protected, and have this in perpetuity in Colorado.”

Southwest Colorado will get its chance to review the draft plan from 5:30 to 8:30 p.m. on Wednesday, June 8, at the Community Recreation Center, 2700 Main Ave. in Durango.

Oral comments won’t be taken at the meeting, and proceedings won’t be recorded. However, people who show up will get the chance to ask questions of Forest Service staff, view maps and other information, and submit comments in writing.

All comments on Colorado’s revised roadless rule must be received in writing by July 14. They can be sent by e-mail to COComments@fsroadless.org, submitted on the Internet at www.regulations.gov or by postal mail to Colorado Roadless Rule/EIS, P.O. Box 1919, Sacramento, CA 95812.

Internet submission is preferred because it’s most efficient for Forest Service staff members who must respond to each comment – and it’s the least costly option for taxpayers. All of the comments will be publicly available at roadless.fs.fed.us