Southwest Memorial Hospital in Cortez is preparing to open its new lobby early this month, the culmination of a $32 million expansion project.

Ironically, the opening comes just a few weeks after the hospital laid off more than 40 employees – roughly 10 percent of its staff – as a cost-cutting measure to keep the organization afloat.

Anthony Sudduth, interim CEO of the hospital, said he realizes the two occurrences may appear to be in conflict with each other.

“I do understand the concern,” he told the Four Corners Free Press. “It becomes a major issue for the community. We had to get rid of 40 very good employees who really did nothing wrong.”

The positions cut, he said, were mostly administrative rather than involved with direct patient care. They included administrative assistants, some unit secretaries in the emergency room, the hospital’s public information officer, and some positions within specific programs, such as administrative directors.

“The reduction in staff caused a lot of concern, but frankly the concern should be in not doing anything,” he said. “We were heading down a path that was not sustainable.”

Since 2015, the hospital had added more than 100 full-time-equivalent positions during a period when revenues stayed almost the same, Sudduth said. “That was a trend that could not continue.”

All the hospital buildings and facilities, new and old, are owned by the taxpayer-funded Montezuma County Hospital District. But the hospital is managed by Southwest Health System, a private, not-for- profit corporation.

This spring, the hospital terminated its former CEO, Kent Rogers, as well as its chief financial officer, chief nursing officer and chief ambulatory services officer, over a period of about two weeks.

The upheavals at the hospital have prompted comment and concern in the community. The hospital, which Sudduth said now has 383 employees, is one of the biggest employers in Montezuma County, and the reduction in force will have a ripple effect throughout the local economy.

And, of course, everyone is invested in the continued availability of quality health care and a critical-access hospital, said Cortez Mayor Karen Sheek.

“Our hospital is a really important part of our community,” she told the Four Corners Free Press. “Health care is important to all of us, regardless what stage of life we’re in, and for a community to have access to a hospital and health-care professionals is critical.” 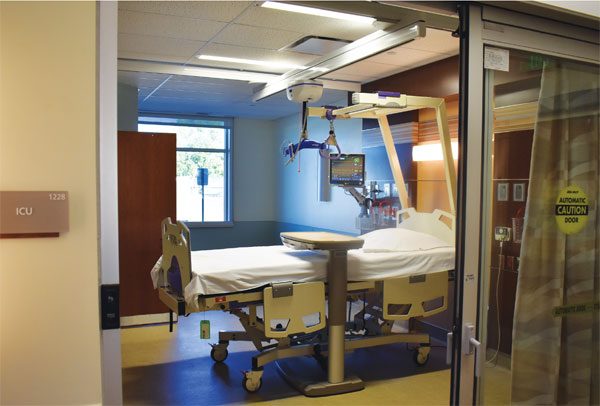 One of three new ICU rooms in the new inpatient wing. Photo by Gail Binkly.

She noted that the community had stepped up to create the hospital in the first place. More recently, in 2015 the hospital district’s voters approved a sales and use tax of 4 cents on every $10 to pay for the expansion, which included a new, state-of-the-art patient wing, an ambulance garage, and a medical office building.

“I think it’s kind of heartbreaking in a lot of ways that this hospital seems to struggle,” Sheek said. “I think we showed with the vote [for the tax] that this community is invested in good health care and we certainly don’t want to see it go away.”

With only two private medical practices continuing to operate outside the hospital, Sheek said, the bulk of physicians and health-care professionals in the county now work for Southwest Memorial, making its viability even more critical.

Sheek said the city has offered the use of City Hall for a public forum for SHS and the hospital district should they want to discuss public concerns. The city has live-streaming and archiving capabilities for such a forum.

“The taxpayers have a big investment in our hospital, and every community wants good health care,” she said.

The new facilities at the Southwest Memorial campus wowed a crowd of local citizens who showed up for tours in June. The new inpatient wing includes four ICU rooms, three family birthing rooms, and 13 rooms for medical and post-surgical patients.

Hospital officials are reportedly evaluating what to do with the second floor of the existing hospital where the patient rooms used to be.

The new rooms include nurse-server storage cabinets to house medical supplies. The cabinets open into the patient room on one side and into the hall on the other, allowing supplies to be restocked and laundry taken from the outside.

This may seem like a minor innovation, but it reduces the number of times people have to barge into patients’ rooms, which can mean fewer interruptions of sleep and rest.

Some other features in the inpatient wing include:

The medical office building has room for 25 providers. It includes waiting areas with separate parts for people who might have a contagious disease such as the flu. The office building also includes a retail pharmacy. 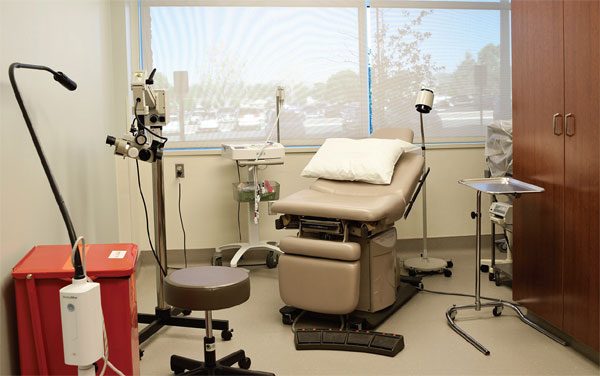 Sudduth, of course, was not involved in the decision to expand as he was not with SWMH at that time. “But,” he said, “when I look at the former structure, we were hearing that people were saying, ‘That facility is getting old and I don’t want to come’ and so I feel really strongly that the addition and the consolidation of the medical staff is going to be a positive.

“The inpatient unit is just outstanding and there’s no one that has better facilities than we do right now.”

The money for the expansion came entirely from the sales tax passed by voters, he pointed out. “The expansion was not a factor that led to where we are right now.”

He added, “I can honestly say the financial position of the hospital would be no better today and maybe a little worse” had the expansion not occurred.

“Since we have opened the new inpatient unit, we’re starting to see volume growth,” Sudduth said.

Sudduth said SHS plans to sell the Heyl building on its campus to the hospital district, then lease it back. SHS also hopes to sell the hospital annex on Market Street downtown and is in the process of obtaining appraisals for it. That would mean relocating visiting physicians’ offices that are now housed in the annex, probably to the new hospital facilities. SHS officials reported to the Montezuma County commissioners recently that because of its problems with revenues, the hospital has fallen out of compliance with the bonding obligation tied to the financing of the hospital expansion.

SHS is supposed to have 81 days’ operating cash on hand, but has far less than that, they said, only about 21 days’ worth.

In addition, officials said that a recent effort to bring in revenues by rebilling some 11,000 Medicaid claims for which they believed the hospital had been under-reimbursed had not produced as much money as hoped.

And the hospital still faces a “whistleblower” lawsuit filed in U.S. District Court for the District of Colorado by a former nurse, Robyn Bragg, who says she was fired as retaliation for complaining about fraudulent records and billing practices. Officials with SHS and the hospital have denied the charges, calling them groundless.

But Sudduth says, following the reduction in force, Southwest Memorial is poised to rebound.

“I feel really good about the future of the organization because they were willing to take the step to secure the future for the hospital,” he said.

“It’s probably a year away before we’re back to a good position, but we are positioned to get there now.”