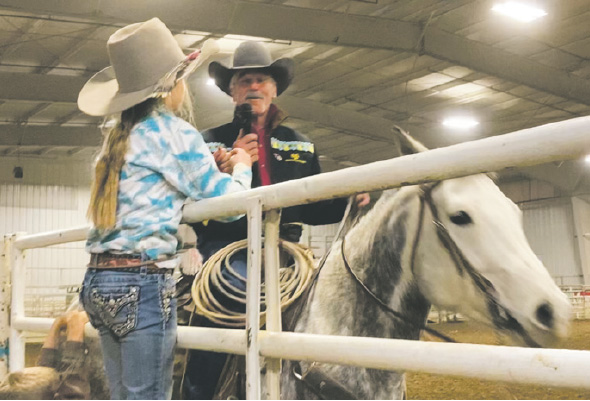 Actor Forrie J. Smith, one of the stars of the TV show Yellowstone, made a surprise visit to
the Montezuma County Fairgrounds on Jan. 16 to visit with the Four States Junior Rodeo
contestants and give them advice on how to succeed in life. Photo by Janneli F. Miller

Yellowstone was the most-watched cable TV show of 2020. It’s about a Montana ranch family, with Kevin Costner starring as John Dutton, owner of the largest cattle ranch in the U.S., who is fighting to preserve his land and way of life.

Forrie J. Smith, a real-life bronc rider who later became a stuntman and actor, also stars in the series as ranch hand Lloyd Pierce. Best known for his roles in Westerns such as Hell or High Water (2016) or Tombstone (1993), Smith now has his first role in an ongoing series.

On Jan. 16, after the Four States Junior Rodeo had wrapped up at the Montezuma County Fairgrounds, the contestants were told to attend a “meeting.”

To the amazement of many, Smith was there. He mounted a horse, grabbed a microphone and began to talk to the audience of about a hundred.

“When people saw him, they just started smiling,” said Liz Tozer, the rodeo announcer, who also works at the Cortez Livestock Auction.

Tozer was responsible for Smith’s visit. She told the Free Press that she had read an article about Smith in which he was quoted as saying, “Everything good in my life is because of rodeo.” That quote inspired her to get in touch with Smith and see if he could speak to the rodeo kids.

“That really hit me, with everything we have all been though in 2020,” she said. While introducing Smith, Tozer told the crowd that she found him on Facebook but wasn’t able to contact him that way, so in August 2020 she sent him a letter asking if he would speak to the junior rodeo contestants. Her letter ended up at the Socorro County (N.M.) Fairgrounds, and luckily someone there knew Smith and passed it along to him. In October, her phone rang with an unfamiliar number, and to her surprise (as well as to that of her grandkids, who recognized his voice) it was Smith replying to her letter, wanting to know what she wanted him to do. “I feel like him coming up here was meant to be,” Tozer told the Free Press, “because that letter could have been thrown in the trash.”

Instead, Smith agreed to the visit. “This year has been so tough on the kids, because of no school, no rodeos, no nothing,” explained Tozer. “They’re having a hard time understanding what is going on, and we are having as tough of a time as their parents.” Tozer mentioned that the usual rodeo awards ceremonies had to be cancelled, and she thought that a visit from Smith might be inspiring for the kids.

“I’ve never done anything like this before,” Smith told her, “I’m gonna do it.” Tozer said Smith made a special trip to the area, and was thrilled to hear about the Four States Junior Rodeo event.

Smith did not disappoint.

“Yeee-haw,” he exclaimed, “let’s all be good neighbors.” He jumped on his horse to begin his 20-minute talk.

“I hope I can make a difference and help you somewhere along the line,” he said. Smith told the crowd a little bit about himself and his life growing up in a rodeo family in Helena, Mont. His father and grandfather were both rodeo cowboys, with his dad winning checks until age 52, while his mother was a barrel racer. Smith participated in his first rodeo at age 8, and when he fell off his horse, told his dad that he wanted to be a stuntman. This was something he did accomplish, spending 25 years of his adult life as a Hollywood stuntman.

Smith told the folks at the Junior Rodeo that he went to a country school with 13 students in eighth grade. “The teachers decided that I would learn more in the back of that station wagon going to rodeos with my mom than I would sitting in a classroom, as long as I kept up with my bookwork.” Thus, his childhood consisted of him and his mother following his father around to rodeos.

“Rodeo was my life,” Smith said. “I didn’t compete in rodeos to be a champion, but in order to make a living, because I loved the life. I miss it to this day – I miss the travel, I miss the friends, I miss the adrenaline. I miss rodeo. But I’ve been blessed with this new part on TV.”

He said that for one part he was given early on, he was told not to talk, so he didn’t, using his facial expressions to communicate his feelings.“That’s it,” he said, “take what they give you and run.”

Another piece of advice Smith shared with the audience was the notion of setting goals and not giving up. “I was 58 years old when I got this part as Lloyd. I was 28 when I started, and this is every actor’s dream – to have a director call up and say, ‘Hey, pack your bags, cowboy,’ and it happened to me – at 58 years! I always kept the dream,” he said.

For 30 years, Smith said, “I always kept putting one foot in front of the other. A lot of people get distracted, but I just kept on. I kept on training horses, rodeoing, doing my thing. I always had the hope and I always had that dream.”

As he rode back and forth in the arena in front of the stands where people of all ages were sitting, Smith would stop occasionally, back up his horse to face his audience, and continue speaking.

“That’s one of the things you kids are going to have to do. No matter how bad things are, there’s always a silver lining somehow, somewhere. The glass is always half full – it’s not half empty. It’s what you make it.”

Smith recommended the book Psychocybernetics: The Power of Positive Thinking’ by Maxwell Maltz. “When I was 14 years old a friend of mine gave me a book,” he said. “I use some things I read in that book to this day. I set goals every day. In the morning watching my horses, I tell myself, ‘I’m gonna do this, I’m gonna do that.’ And I don’t always get them all done, but setting goals is what’s important.”

Smith also talked about creating a habit of thinking positive. He said that every time he rides, he does the same things in the same order to get ready. He said he’ll mount his horse in a certain way, set his rope a certain way, or put his gloves on in a particular manner, and he makes this a regular practice.

“Think positive. There’s times I’d be behind the chutes, and I’d have a horse that had a bad trick to him, or he was a bucker, and you can’t think about that, or it’s not gonna be good. You can’t think negative – think positive,” said Smith. “Get into a routine – think the same thoughts every time you’re in the chutes.”

He told the audience that it’s easy to get distracted, and that thinking about other things besides what you have to do will not help. Staying focused will get you where you want to be. He used the example of falling and breaking ribs, and then having to get on and ride again.

“If you think of your broken ribs, well, that won’t help,” he said. “But if you get into your routine, and proceed with your tasks one at a time, well you won’t be thinking about that painful rib anymore. . . . Think of the end results and the means will take care of themselves,” Smith advised.

Tozer was thrilled that Smith visited, and was also inspired by his talk. According to her, the kids “need to hear that message – about focus on what you did good – and to hear it from someone besides their parents.”

The Junior Rodeo is held three weekends a year, in November, January and February, with a total of six different rodeos. To qualify for an award, the youths have to participate in four of the six rodeos. The January rodeo had about 100 contestants, for youngsters 5 through 18 years old.. There are eight age groups, and awards are given to those who earn the most points in each age group.

“They can enter up to five events,” she explained. “We give awards 10 places down, and after 10 places they’ll get a participant award, so they get something to keep them interested to keep them going.”

Awards are belt buckles and saddles for the best all-around, donated by local residents and businesses.

“This year is the first year in 23 years that we’ve given saddles that I had all the saddles donated before we started the rodeo,” said Tozer. “With these young kids – you’ve got to give them an incentive to keep with it. We go through a lot of awards,” she said, laughing.

One of the rewards of the January 2021 rodeo was a chance to listen to Smith. When he was finished, he asked the audience if they had any questions. The first one was about Season 4 of Yellowstone, and what will happen. All Smith would say is that it will premiere in the summer of 2021, and he is sworn to secrecy until then.

The fictional series was created by Taylor Sheridan. Season 1 aired in 2018 to rave reviews and record-breaking numbers of viewers (over 5.2 million watched the Season 3 finale).

Seasons 1-3 were filmed in Utah and Montana, but Season 4, which finished filming in September 2020, was shot entirely in Montana due to the pandemic.

The show is available on Paramount Network, NBC Universal’s streaming platform Peacock, and on Amazon Prime.

When there were no more questions, Smith dismounted and posed for photos with some of his young fans. Big smiles prevailed and shortly a line formed, with many asking Smith to sign their cowboy hats.

Maybe those signed hats will bring luck for those who participate in the next rodeo, Feb. 20 and 21 at the Montezuma County Fairgrounds.