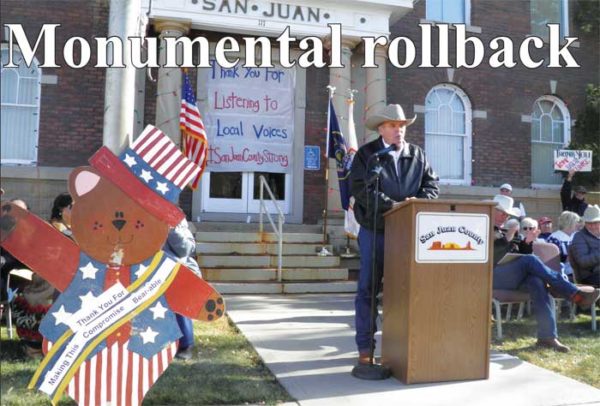 President Trump thumbed his nose at the legacy of two of his predecessors, Barack Obama and Bill Clinton, issuing proclamations on Dec. 4 slashing the national monuments they had designated in Utah.

Trump’s orders would reduce Bears Ears National Monument in San Juan County from the 1.35 million acres set aside in 2016 to two parcels totaling about 200,000 acres.

They also reduced Grand Staircase- Escalante, which sprawls across Garfield and Kane counties, from 1.9 million acres to about 1 million, scattering that among three separate parcels.

However, conservation groups and Native American coalitions say that isn’t the end of the story, and they will fight Trump’s actions in court.

“Today’s illegal proclamations by President Trump represent the single greatest attack a president has ever launched against America’s federal public lands,” said Southern Utah Wilderness Alliance Executive Director Scott Groene in a statement. “It is certain that the legacies of both President Trump, and Sen. Orrin Hatch, who goaded him into this despicable act, will be forever tainted by their assault on more than two million acres of Utah’s wild lands that are beloved by the American public.”

Speaking at the state Capitol in Salt Lake City before a hand-picked, invitation- only crowd, Trump said he was acting to “reverse federal over-reach and restore the right of this land to citizens.” He said he had asked “all the friends I have in Utah” and they had assured him this was the right thing for Utah. “They all said it wouldn’t be controversial,” he joked.

Trump’s appearance was greeted by both supporters and detractors lining the streets. Signs such as “Zinke is stinky” and “Don’t touch my p—y or my monuments” were common,. But the crowd was reportedly smaller than the estimated 5,000 who rallied at the Capitol on Dec. 2 to protest the rollbacks. Speakers at that rally included Navajo Nation Attorney General Ethel Branch and Virgil Johnson, chairman of the Confederated Tribes of Goshute, according to the Salt Lake Tribune. 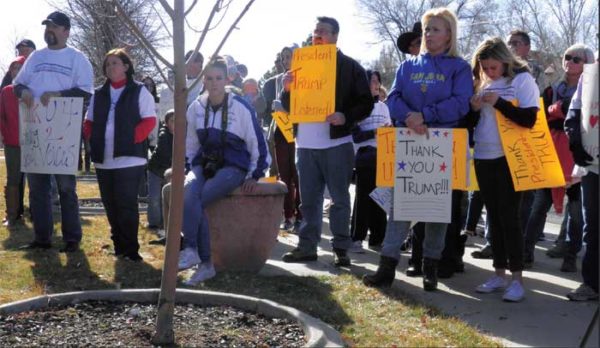 Supporters of the president’s actions held a rally of their own in Monticello on Dec. 2 to thank Trump in advance of his announcement. About 200 people gathered in front of the county courthouse to hear from a number of dignitaries who praised Trump for listening to their voices and taking action. The crowd carried signs with slogans such as, “A monumental miracle” and “A monumental day.”

San Juan County Commissioner Bruce Adams told the assembly Trump is “not the ordinary politician” and had listened to 15,000 people who live in that county rather than the voices of outsiders who wanted the monument.

He also praised Interior Secretary Ryan Zinke, who conducted a review of more than two dozen monuments and toured the Utah monuments on horseback.

A second San Juan County commissioner, Rebecca Benally, who opposes Bears Ears despite the fact that the Navajo Nation officially supports it, said locals “have been bullied by special-interest groups.”

“People who thought they were experts wanted to define us,” she said, adding that such people “couldn’t find us on a map” before Bears Ears was designated.

“Bureaucrats thousands of miles away didn’t think we were capable of protecting and preserving our homeland,” she said. 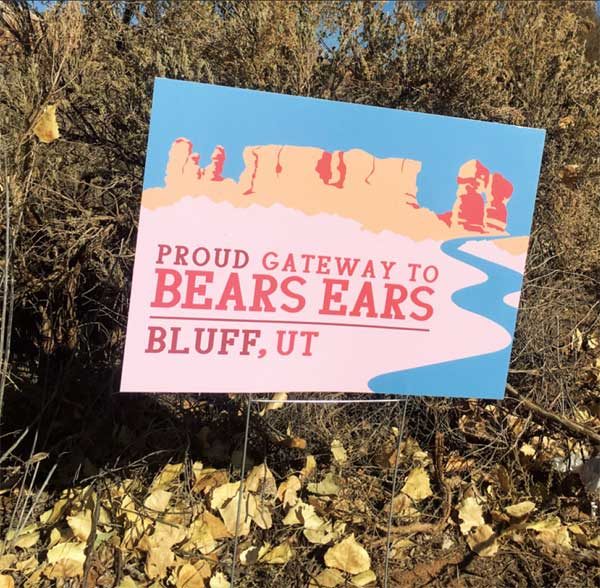 Bluff, Utah, abounds with signs touting its Connection
with Bears Ears National Monument, which was slashed in size by about 85 percent in a proclamation issued by President Trump on Dec. 4. Photo by Janneli F. Miller.

And the other San Juan County commissioner, Phil Lyman, donned a red “Make America Great Again” ball cap at the end of his remarks. Paraphrasing Thomas Jefferson, he said, “Let’s not allow our children to become homeless on a continent our forefathers conquered.”

Jerry Taylor, a commissioner from Garfield County, said the organizations that supported the monuments are not just special-interest groups, but “selfish interest groups.”

“We love the land and we’re not out to destroy it or do anything with it,” he said.

In his remarks in Salt Lake City, Trump said that by undoing the monument designations on large swaths of land, he was likewise doing away with “harmful and unnecessary restrictions on hunting, ranching and reasonable economic development.”

He said he was restoring public access and enjoyment, though in fact the monuments have always been open to the public, and that people could now “put our nation’s treasures to great and wonderful use” such as hiking and cattle-grazing.

He did not mention coal-mining, but it is widely believed that part of his motivation for undoing stricter protections on the Kaiparowits Plateau, now part of Grand Staircase, was to open it up for extraction of the vast coal reserves under its surface.

“Together we will usher in a bright new future of wonder and wealth, liberty and law, and patriotism and pride all across this great land,” Trump said. But Trump’s orders are not the final word on the fate of the two monuments. Both were created under the authority of the 1906 Antiquities Act, which gives presidents the power to set aside lands for protection.

The act, however, does not specifically authorize presidents to undo or downsize previously created monuments, and a host of conservation groups plan to challenge Trump’s actions in court, issuing angry statements shortly after Trump’s event ended.

The ink had hardly dried on his signature on the proclamations before Earthjustice, representing a host of conservation organizations including the Wilderness Society, Grand Canyono Trust, Sierra Club and more, filed suit in U.S. District Court in Washington, D.C., against the downsizing of Grand Staircase.

A coalition of Native American tribes that had supported the monument, including the Navajo, Hopi Zuni, Ute Indian, and Ute Mountain Ute tribes, had also filed suit.

“President Trump has perpetrated a terrible violation of America’s public lands and heritage by going after this dinosaur treasure trove,” said Heidi McIntosh, managing attorney in Earthjustice’s Rocky Mountains office, in a statement.

“While past presidents have used the Antiquities Act to protect unique lands and cultural sites in America, Trump is instead mangling the law, opening this national monument to coal mining instead of protecting its scientific, historic, and wild heritage. We will not let this stand. We will use the power of the law to stop Trump’s illegal actions.”

Grand Staircase-Escalante monument reportedly contains dinosaur fossils found nowhere else in the world. Since the monument’s designation, 21 new dinosaur species have been unearthed by scientists, according to Earthjustice.

“In mid-October, scientists airlifted one of the most complete tyrannosaur skeletons ever found out of Grand Staircase,” the organization said in a statement. “These fossils are largely found in the Kaiparowits Plateau, where the coal industry has long coveted access for coal mining that would wreak havoc on this dinosaur treasure trove that belongs to the American people.”

Chris Saeger, executive director of the nonprofit Western Values Project, called Trump’s orders “a dangerous turn in our nation’s approach to protecting the places that have forged the Western way of life.”

“The fact that an American president would unlawfully remove protections on iconic public lands for political gain should deeply disturb anyone who wants these places, which are a birthright to our children, to continue to benefit all of us,” Saeger said in a statement.

“Fortunately, legal experts overwhelmingly agree that undoing these protections is unlawful and will not stand.”

But supporters of the rollbacks remained ecstatic even while warning that more challenges lie ahead.

Utah State Sen. David Hinkins told the crowd in Monticello on Dec. 2 that 80 to 90 percent of the state’s legislators supported the downsizings.

“We’ve won a battle here but I don’t think we have won the war,” he said.

“We need to get control of these lands under the state of Utah.”