One day, sculptor Patsy Davis’ wire-hair pointer paced the house, begging to go out. Davis ignored her — until a squeak caught her attention. Picturing mischief, she dashed to see what the dog was doing.

The dog wasn’t doing anything. She had bumped a duck figure that bounced on springs. Patsy let her outside. Now when the pointer wants a word with her mistress, she pokes the duck. 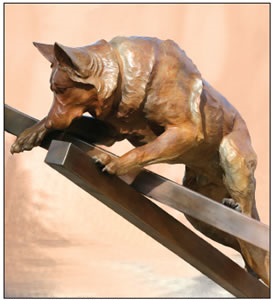 “Semper Fi,” an 8 1/2-foot bronze sculpture created by Mancos artist Patsy Davis, is one of many works in which she explores the personality of dogs and other animals. Her sculptures are on display at the Goodnight Trail Gallery of Western Art in Mancos.

“I could go on for hours about all the things she’s communicated to me,” Davis chuckles in a phone conversation from her home in Mancos. “I’ve had dogs all my life. I love dogs.”

So she sculpts them, fusing personality and physical presence into the bronze forms she creates. Her ideas come from her experience of owning many breeds of dogs, hunting with bird dogs, and working sheep with border collies.

The impetus for one of her pieces, “Semper Fi,” an 8 1/2-foot bronze at the Goodnight Trail Gallery of Western Art in Mancos, came when she heard an NPR story exploring how the United States has used dogs in wars, and on 9-11.

Interested in how people put animals to work, she studied rescue dogs, learning that “if dogs looking for live victims find too many dead bodies, they stop searching. Their handlers get depressed and the dogs don’t want to make their handlers sad.”

She decided to sculpt a tribute to rescue dogs, and in her studio, created a clay German Shepherd atop a collapsed doorway. One day, she left a heat lamp on the model when she finished working with it.

Returning later, she discovered light from the lamp flinging cross-shaped shadows on her studio walls. “Which really blew me away. I can’t explain the impact of walking up the stairs, and looking into my room, and seeing those shadows.”

Crucifixion in its historical sense prior to Christianity, combined with thoughts of dogs at work, became the emotional core of “Semper Fi,” short for Semper Fidelis, the Marine Corps motto.

She altered her design to let the German shepherd look down into a pile of crossed beams and girders with an expression of tenderness “I wanted it to be obvious that the dog had found something living.”

“Semper Fi” toured the country in a show entitled “Paws and Reflect The Art of Canines,” organized by the Society of Animal Artists. Davis received letters stating that the sculpture touched viewers.

Making any piece is an emotional experience for her. “I am totally in love with making sculpture.”

Her creative process begins with observation. “For me it’s more a matter of eliminating a hundred ideas I have for a piece and settling on one that’s worth time and the financial investment to make.”

She infuses her sculptures with energy, even when subjects stand still. For a bronze entitled “Not Very Hairy” she used a hunting dog that didn’t point to birds with one leg raised. She placed him on all fours staring a bird down. “I always try to show what animal’s thinking, doing, and why they are there.”

Besides dogs, she sculpts baby elk, parrots, pigs, cows and calves. “Cows are great for sculpture. They’re bony and have great planes.”

Working on the calves as the stock market plunged, she named a sculpture of a running baby “Plunging Stock,” a calf scrambling off the ground “Rising Stock,” and one standing for the first time “Taking Stock.” She named her pregnant pig “Great Expectations,” and the two bull elk she’s creating right now “Reign Dance.”

Her interest in art goes back to childhood days in Des Moines, Iowa. As a kindergartner, she made ash trays to sell her friends as Christmas presents for their parents.

She stuck any animal that she could catch or “make follow {her} home” into a cardboard box long enough to copy it in modeling clay, play dough, or mud.

When she wasn’t creating animals, she sat on the creek bank near her house making cowboy and Indian villages.

Upon graduation from high school in the 1970s, she attended the Rhode Island College of Design in Providence. The curriculum stressed abstract and conceptual art, which taught her the principles of using form and plane. Though she did little of the realistic work she loves, she considers her education “a great experience.”

A freelance career in industrial design followed college. As the “jewelry capital of the world,” Providence offered her the chance to create everything from pewter table top statues to figures for Hasbro Toys. She helped develop several of the My Little Ponies, and created a Snow White and the Seven Dwarfs chess set for Disney.

In 2002, Hasbro and other companies began out sourcing design work to China. Davis came to Colorado and started working in bronze. A friend introduced her to Veryl Goodnight, who guided her to good foundries and shared her own knowledge of bronze with Davis.

“Right from the start Veryl and I were crazy about each other. She couldn’t have been more helpful. So now I’m a starving artist,” Davis laughs.

Though she’s teasing, she points out that casting bronze is a long, expensive, unpredictable process. At any step, the technology can fail and ruin the piece.

She puts up with that because bronze will “still be here when people are gone.” Permanent, durable, rich, and beautiful, “it’s a great public medium.”