Opposite views: Protests for and against Black Lives Matter rage in Cortez

Protesters with differing viewpoints clash on Cortez’s Main Street on the morning of Aug. 1. Photo by Gail Binkly.

Cortez’s Main Street has become a lively place to be on Saturday mornings.

For weeks, people have turned out for a march organized by St. Barnabas Episcopal Church in support of the “Black Lives Matter” movement. It reflects demonstrations taking place nationwide that began after the death of George Floyd, a black man suspected of passing a $20 counterfeit bill, who was suffocated under the knee of a Minneapolis police officer on May 25.

The walks, usually involving 40 to 50 people, have been peaceful and low-key Marchers carry everything from Black Lives Matter signs to American flags to hand-drawn signs with Bible verses or messages about peace and justice.

Recently, a motorized counter-protest to the BLM march has been taking place in Cortez at the same time. While the BLM supporters walk along the sidewalks, trucks, cars and motorcycles drive up and down Main. There was an impressive number of them on Aug. 1.

The counter-protesters apparently want to show general support for freedom, police, and the American way, and anger at the BLM movement.

On the Facebook page for J. Fargo’s restaurant, which organized and supported the happening, a post prior to the event said, “We invite all who are interested to come together and show our First Responders with a special SHOUT OUT to our Law Enforcement that as a community they have our support!”

The vehicles in the parade carried American and a few Confederate flags, as well as pro-Trump banners. Some flags had a blue line, which shows support for police. Tiffany Ghere, manager of J. Fargo’s, posted on Facebook after the event, “Thank you all who came to Honor the Price of our Freedom, Our Front Line, and All it Means to Be American. See you next week.” 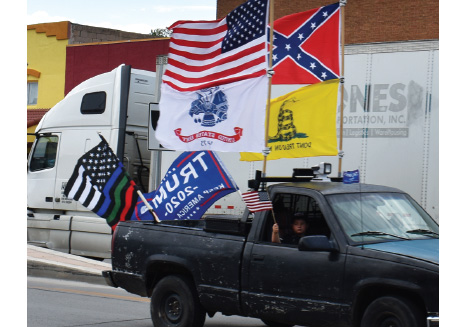 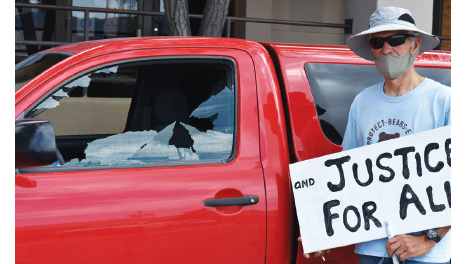 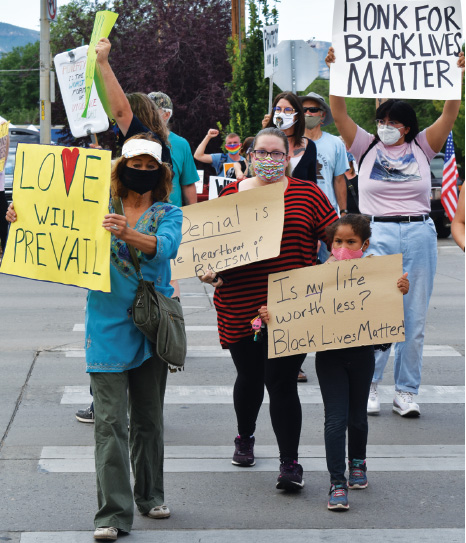 The BLM movement is concerned with what supporters see as racism on the part of many police officers, particularly in large cities. There have been calls to “defund the police,” which confuses people because it seems to imply getting rid of law enforcement altogether – something that would clearly not be practical any time soon.The events have been peaceful for the most part. Cortez police cars drove back and forth on Main during the march Aug. 1. However, while the BLM marchers are quiet (although they do urge supporters to honk while driving by), the counter-protest was deafening, featuring ear-splitting motorcycle engines, blaring music and truckrevving. Meanwhile, the Cortez Farmers Market was taking place at the same time at Elm and Main, trying to entertain its patrons with live music.

Over the years, there have been very few serious allegations of misconduct against the Cortez Police Department or Montezuma County Sheriff ’s Office.

“The Black Lives Matter movement. . . is very much in the spirit of [the late Congressman] John Lewis and his civil-rights group,” wrote a University of Virginia professor of media studies in a column in the Denver Post.

But it has clearly generated a great deal of anger in Montezuma County. “All lives matter!” drivers repeatedly shouted at the pedestrians on Main. Others said, “White lives matter!”

The marchers remained silent, waving at passers-by. However, one man walking on the street who was not part of the protest and was startled by the parade of pro- Trumpers yelled, “This is Dinetah [home of the Navajo]! Go back to Europe, fascists!” at the motorized procession.

One BLM marcher returned to his parked vehicle after the event to find his driver’s side window smashed in. Another BLM protester, who asked not to be named, said she was disturbed by the menacing behavior of some drivers. “Crossing the road was really dicey with those people revving their engines,” she said.

One incident in particular disturbed her. “There was a child in our ranks. I was behind her. We were in front of the Fiesta Theatre and a truck came screeching to the curb, coalrolling. The child was inches away. I grabbed her shoulder. She was engulfed in black smoke. What goes through your mind that would make you choose to coal-roll six inches from a 6-year-old child?”

Coal-rolling, a practice in which drivers of diesel pickups tweak their engines so they can blast out foul black fumes when they stomp on their accelerator pedals, is illegal in Colorado. Diesel particulates have been proven carcinogenic.

In Montezuma County, fewer than 1 percent of the population is black, according to the U.S. Census Bureau.

Cortez has on occasion drawn national attention for alleged racism. In January, back before the pandemic, news outlets reported on seemingly racist items being sold at the Antique Corral, a store south of town. A patron had complained about signs for sale in the store that said “Colored seats in rear” and “We serve colored – carry out only,” as well as stereotypical figurines of black people that hearkened back to slaves on plantations. Photos of the items circulated on social media. The owner of the store said the items were popular and weren’t meant to be racist, that some black people found them amusing.

In 2004, 18 students from Dillard University in New Orleans and the University of Colorado in Boulder were visiting Cortez and walking along Main from their motel to Walmart late at night when a truck bearing a Confederate flag drove up and the driver confronted them, allegedly yelling racial epithets.

The police were called, and drove the students back to their motel, but no charges were filed by the district attorney.