In 1964, Japan Air Lines National Haiku Contest attracted 41,000 entries. That’s a tremendous outpouring of syllables struggling to imitate a traditional poetic form. Haiku, as most of us learned in school, consists of 17 syllables in a highly condensed and structured vocabularic container.

A bitter morning:
Sparrows sitting together
Without any necks.

American writers of English, of course, do not produce authentic Japanese haiku. The two languages are only slightly compatible, and the success of their efforts varies, all too often in the eyes of those who are obsessed with counting syllables. 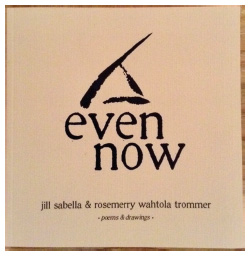 Enter Jill Sabella and Rosemerry Wahtola Trommer, with their new collaborative effort: Even Now (Lithic Press, 2016). Together they have produced an extraordinary hybrid which combines three-line poems with threeline brushstroke drawings. Reminiscent of the old form, the book marries verbal and visual expression and the two are literally one.

Try to simply read it like a book of poems and it’s an impossible task, because each drawing — a triplet of brushstrokes — hovers on each page like a black sun above a verbal horizon. They are time lapse cameras mounted to tripods collecting the same light. And they are so much more. This review, stodgy with paragraphs, cannot competently demonstrate how intuitively the two depend on each other, but hold their book in your hands and it’s obvious, undeniable, remarkable. You’ll inhale the book with one breath, exhale it with another, then go back and forth, rediscovering the layers you missed.

it’s not what I
expected said the fish
given wings

Like the triumphs of evolution, these pairings adapt, informing each other with expansive images and precise, uncluttered lines and language. Nothing is so satisfying as reading a page that ripples the brain, touching both the head and the heart.

Lithic Press has produced an elegant volume, 6 inches square, 45 flutterings thick, complete with an introduction. It’s well worth the $20 price tag, this encounter with a new species of expression.