Pondering twists of fate: A local author finds that things have a way of working out 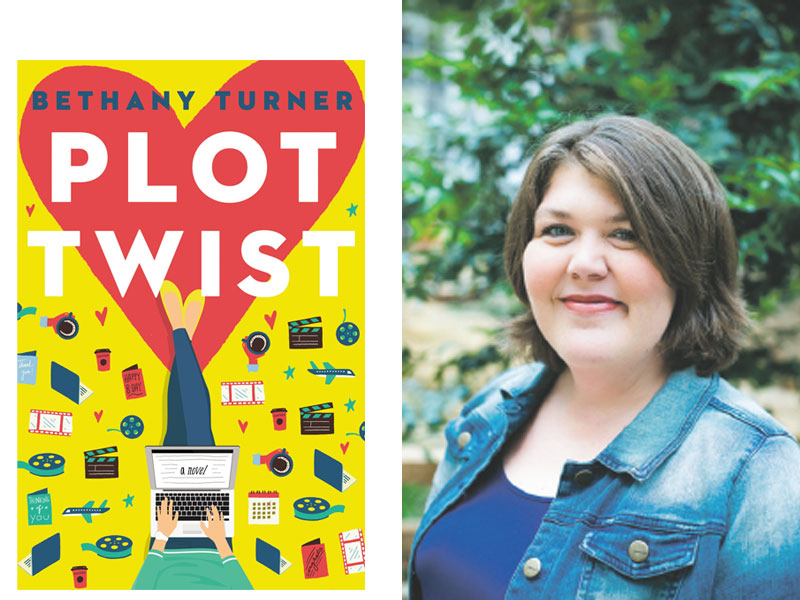 2020 was a year in which it was a little dif­ficult to believe in happily-ever-afters.

But Bethany Turner has never stopped be­lieving in them and writing about them.

The Cortez resident just released her first novel for Thomas Nelson/Harper Collins, Plot Twist. It followed three novels published by Revell/Baker Publishing Group. All four are romantic comedies that look at the bright side of life.

The third of her novels, Hadley Beckett’s Next Dish, was released in May 2020, just as the COVID-19 pandemic was surging.

“It was a horrible time to release a book,” Turner said in a phone interview with the Four Corners Free Press. Her public appear­ances for that book were canceled as soci­ety was locked down. And Turner wrestled with the issue of publicizing a rom-com at a time when the whole world was suffering horribly.

“What I struggled with the most person­ally was I didn’t know how to promote my writing in a way that didn’t seem insensitive. ‘You may lose your job or health, but here, wrap your head around this romantic com­edy.’

“But we need to laugh and to escape a bit. I think it’s okay to just write a story that people have fun with, that doesn’t have to change your life.”

Plot Twist indeed offers the opportunity of escape from grim reality. Well-written and replete with humor, it tells the story of Olivia Ross, who has a chance encounter in a coffeehouse with a handsome man who in a whimsical manner helps save her from the annoying come-on attempts of another man.

Ross is a writer of greeting cards who dreams of finishing a screenplay. Her res­cuer is an aspiring actor. When they part, they make a half-joking promise to meet each other in the same coffee shop in 10 years to see how well they succeeded with their dreams.

They forget to exchange names, but Olivia later sees a movie with an actor named Hamish MacDougal, and she identifies him as her cof­feehouse com­panion. As the years go by, ev­ery Feb. 4 brings odd encounters and coincidenc­es – yes, plot twists. Olivia dates men and develops serious relationships, but they never seem to quite work out. She plugs away at her screenplay but can’t finish it.

However, MacDou­gal seems to be skyrocketing to fame. She doesn’t even want to hook up with him on their 10-year anniversary. But fate seems to keep bringing him into her life in unexpect­ed ways.

Turner said that it was only 10 or 12 years ago that she plunged into writing seriously.

“I was working in banking. It was a stress­ful time. I wrote late at night after everybody went to bed and I just got hooked.

“I always enjoyed writing but never had done it just for fun. At work, if somebody need­ed something written better, they’d bring it to me.”

When she produced a nov­el and sought to have it pub­lished, she got rejections from agents and pub­lishers. Finally she submitted her book to a manuscript sub­mission service to be consid­ered for their list, even though everything she’d read about such services said they were a waste of money.

“But it was 13 days before I heard from the ones that went on to be my publisher for my first three books,” Turner said. “It feels amazing to be published. It was hugely exciting.”

Suddenly her writing became real, she said, when before, “it just felt like a hobby.”

“It still does sometimes, but there are contracts, there are expectations. It got real very fast. To be able to pursue this dream I’d never known I really had was wonderful.”

Turner said her love of romantic com­edies came from movies she saw while com­ing of age in the 1980s and ’90s. She’s always been a reader, too, and is particularly fond of Jane Austen, whose books she re-reads frequently.

“Almost every great romance out there today, she already did it,” Turner said. “I do love rom-coms. Probably Bridget Jones’s Diary is my favorite. A great romance that makes me laugh – there’s nothing better.”

When she began writing seriously, she never considered not writing a romance.

“That’s what I love. Telling those love sto­ries and the ridiculous things that go along with falling in love, staying in love, falling out of love.

“I do consider myself a romantic. There is so much to be explored within a romantic relationship.”

Turner’s belief in romance has been bol­stered by her own marriage to Kelly Turner, general manager of KRTZ/KVFC radio in Cortez.

Bethany, who was born in Covington, Ky., met Kelly in an Internet chat room. They hit it off and were married in 2001.

“The honest-to-goodness truth is he in­spires everything I write,” she said. “Our life is not a romantic comedy, but I write about heroes who ultimately are guys worth spend­ing your life with. That comes from him.

“We’ve been married 20 years now. He never ceases to amaze me. The support he gives me. Just on the practical side I literally could not do it without his support. This is a guy willing to take care of the dishes because I am on deadline, and he helps with these things even when I’m not on deadline. None of it would be there if it wasn’t for him.”

One of the things Turner found most difficult about writing Plot Twist was creat­ing the lines from greeting cards that begin each chapter – lines presumably written by the main character, Olivia, and reflective of what was going on in Olivia’s life at the time.

“As I was editing and as chapters changed a little bit, I had to revise the theme. This was the hardest part of the edit,” Turner said. “I’ve never written greeting cards – nor shall I ever.”

The COVID period threw something of a monkey wrench into Turner’s writing ef­forts, what with everyone being mostly at home.

“In my writing I definitely struggled. I have a designated creative spot in my house and I was there all the time. It just kind of sucked the creativity out of the setting for me. I didn’t write for a while, possibly six solid months.”

2020 was also difficult for her and Kelly’s children, two boys, both now in high school. Like many children, they found it difficult to be out of school and cut off from their peers. But now that the worst of the pandemic appears to be over, Turner is hopeful about the fu­ture and believes she learned some lessons.

“I feel like I got some new ownership of the writing and different aspects of it all,” she said. “I came out knowing myself a little better.”

On June 26, she had her first in-person book event since February 2020, an after­noon tea on the lawn at the Farmington Public Library. “It was fun,” she said.

Turner is not a stranger to personal strug­gles. At the age of 17, she had one ovary removed because of cancer.

“I was told having kids would not be easy, that it would take medical in­tervention,” she said. But when she and Kelly were married, their two sons came along without such intervention. “They were healthy kids. We could not be more grateful.”

Her second son had to be delivered by C-section. During the operation, a tumor was found on her remaining ovary, which had to be removed.

It was decided later that she should have a hysterectomy, and yet another tumor was found on her appendix. It also was removed and now she appears to be clear of cancer.

“Life is short, life is miraculous,” she said. “You don’t know what’s coming and you need to get the most out of what you’ve got. To have these miracle kids – to know that if it wasn’t for one of them, I wouldn’t have had this diagnosis – it shows me there’s more at play here and I need to do what I can with the life I’ve got and I’m going to give it my all.

“I love it. I have the opportunity. There’s no chance I don’t want to make the most of it.”

Turner is currently doing edits on her 2022 release, The Do-Over, which will be out next March.

“It’s very hopeful,” she said. “It has noth­ing to do with the pandemic. It’s about a woman re-evaluating her life for a bit.”

In the meantime, she’ll be promoting Plot Twist, a book she did not find it difficult to plot out.

“At the time I don’t really know that I was writing plot twists,” she said.

“In all my stories, I love keeping you on your toes just a little. There will be a happily-ever-after, but I keep the reader guessing how we’re going to get there. That’s just kind of how my brain works. I like to go down the slightly less-traveled path.”

Turner is eager to hear from her readers.

“I’m grateful for people who want to read the stories I tell.”