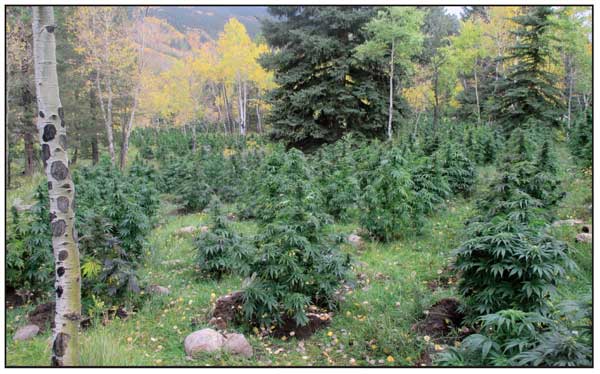 Cannabis thrives in this illegal grow site along the Dolores River. Despite the fact that pot is legal to grow and use in Colorado, the state is seeing more black-market marijuana operations. Courtesy of the U.S. Department of Justice and Bureau of Land Management

At first blush it may seem paradoxical. But despite pot being legal to grow, sell and consume in Colorado, the state is also becoming an increasingly popular home for major black-market cannabis operations.

“We have seen a notable increase this year in illegal marijuana grows in western Colorado,” U.S. Attorney John Walsh said recently in a statement announcing the indictment of two men for conspiring to produce and distribute wholesale quantities of the drug. “As we work with the DEA, BLM and local law-enforcement partners, we are seizing large amounts of marijuana.

“In addition, we have charged a total of 12 individuals, many here illegally from Mexico, for tending to these marijuana grows,” Walsh said in the press release.

Luis Garcia, 33, and Luis Rios-Cortes, 23, were arrested last month following a raid on a property nominally owned by Garcia’s sister near Cedaredge during which nearly a ton of dried marijuana was seized and drying sheds and equipment “consistent with items used in a large-scale operation” were found, according to the accompanying affidavit of Jason Greenfield, an agent with the Drug Enforcement Administration. 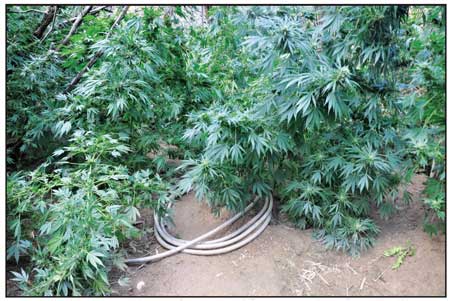 These cannabis plants being cultivated illegally along the Dolores River were found during raids conducted in September. Courtesy of the U.S. Department of Justice and Bureau of Land Management

Those indictments closely followed September busts at two sophisticated pot farms along the Dolores River between Gateway and Naturita on public land overseen by the Bureau of Land Management.

Garcia continues to be investigated for his role in those operations, which resulted in the arrest of 10 other suspects who allegedly were tending the blossoming crops just as they were ready for harvest.

The protracted drought in California, where federal lands have been used for many years to cultivate illicit commercial crops of marijuana, is believed to be one big reason clandestine farmers have been drawn to this area, explained Jeff Dorschner, a spokesperson for the U.S Attorney’s Office.

“Generally California is known for their large number of public-lands marijuana grows, but they’ve had a horrible drought and bad fire seasons [recently],” Dorschner said in an interview with the Free Press. “On the other hand, “Colorado has had a better-than-normal growing season.”

“Also (because of) the more liberal posture on marijuana, people wrongly speculated that this would be a better place to grow marijuana this year.”

“And they don’t have to pay taxes, so illegal marijuana can be cheaper.

“We believe the market is mostly out-of-state,” he added, having been shipped to Florida in two instances.

In mid-September, BLM rangers and other law-enforcement nabbed four Mexican nationals at one grow site along Highway 141 across the Dolores that was hidden by dense foliage. More than 1,200 thriving mature plants were confiscated.

Those suspects also were charged with conspiring to grow and distribute pot as well as degradation of public lands. 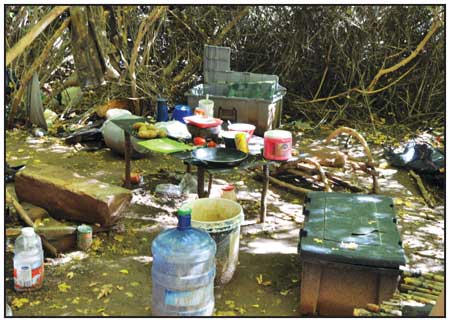 Debris strewn about two illegal cannabis grow sites found recently on the Dolores River included water bottles and food containers for workers, as well as containers of fertilizers and pesticides, some of which are banned in the United States. Courtesy of the U.S. Department of Justice and Bureau of Land Management

Camouflaged tents, camping supplies, generators and hand-held radios were found at the site. An irrigation system that apparently sucked water from the river into a cistern was being employed.

Then on Sept. 30, rangers and other agents raided a markedly similar operation just four miles away – with the same sort of irrigation, radios and gear.

According to Greenfield’s affidavit, Garcia had been under surveillance since April, when the supervisor of a BLM crew working along the Dolores River to eradicate invasive species (other than pot plants) had first noticed two pickups regularly coming and going from the otherwise remote stretch of the river, sometimes loaded with passengers and equipment, other times empty except for the driver, and often parked along the river for extended periods with no one around. Both those vehicles were regularly driven by Garcia and registered to his sister, Esther Garcia, and her husband Fredy, residents of nearby Parachute. Esther Garcia was also the listed owner of a property near Cedaredge in the gated community of San Juan Vista.

After months of tracing Luis Garcia’s movements, agents had gathered sufficient evidence to obtain search warrants for both properties that were executed Nov. 13.

In Parachute, Esther and her husband were told they could leave the residence, according to the affidavit, but agreed to be interviewed.

Esther Garcia allegedly told Greenfield that her brother regularly gave her money for her family’s living expenses and that she had agreed to put the truck in her name along with the property near Cedaredge, for which he had given her a $20,000 cashier’s check for the down payment.

An undisclosed “large amount of U.S. currency” was found in the bedroom of Esther Garcia and her husband during the search.

Also discovered were numerous documents related to the purchase of the San Juan Vista property, and other papers with the names of suspects who had been arrested during the sweeps along the Dolores.

Simultaneously, agents executed a search warrant at the San Juan Vista location, nabbing Rios-Cortes and seizing close to a ton of pot, while another unidentified suspect fled into the woods and escaped.

Dressed in camouflage clothing like many of the other suspects, and armed with a semi-automatic handgun, Rios- Cortez surrendered to agents after briefly considering flight, the affidavit noted, but making no attempt to use the holstered sidearm.

Agents then filled a U-Haul trailer with close to a ton of dried and drying cannabis bud, according to Greenfield’s affidavit, 36 sealed and initialed plastic lawn bags containing about 40 pounds each and six large tarps with about 70 pounds apiece. The bud had been discovered in tents and a large processing shed that had been spotted during a flyover of the property.

Garcia, who was being tailed while heading toward the San Juan Vista location, was stopped and taken into custody by Delta County sheriff ’s officers and held on traffic charges until the raid was completed.

Interviewed at the Mesa County jail, Garcia – while readily acknowledging that the plethora of pot found on his sister’s property belonged to him – then spun a fantastic yarn akin to the fairy tale of Jack and the Beanstalk. The suspect maintained it had all been produced from just a half-dozen plants, the maximum number allowed under Colorado law for personal use.

“Luis Garcia informed agents that this was his first attempt at growing and that the six plants of marijuana got away from him and that was why he had so much,” Greenfield recounted.

“A short time later, the agents terminated the interview.”

In addition to the criminal aspects of using public lands for pot farming, the impacts on the land itself as well as on legitimate users are a mounting concern.

Pesticides and fertilizers that are not legal in the U.S. have been found at some grow sites, Dorschner said.

“Grows on public lands are hurting the environment, the ecosystem where they’re growing it.

“The land takes quite a beating,” he said. “The public-lands agencies, whether it’s the BLM or the Forest Service – has to try to restore that land to its original condition, which is expensive and difficult.”

And those charged with protecting the nation’s treasured public lands couldn’t agree more.

Chris Joyner, BLM public affairs specialist with the western Colorado BLM office, told the Free Press such illicit farming inevitably scars the land, leaving behind mountains of trash, excrement and other blight that legitimate users should not have to confront.

“When you start to have semi-permanent dwellings, it has impacts on the different types of plant species and there’s quite a bit of hazardous waste on site –different types of material associated with the grows,” Joyner said.

Additionally, long-term occupancy in areas like those of the recent busts along the Dolores creates trails through delicate cryptobiotic soils that can take decades or longer to recover, he said. And, of course, there are concerns about what might happen if unwitting hikers or rafters stumble across growers at an illegal site. The sites along the Dolores were reportedly quite close to the river and to a highway. Growers may be armed and very protective of their plots.

“Just the criminal nature of what they were doing has a nexus that certainly isn’t safe for the public to enjoy their lands,” Joyner added.

“It is a huge concern for us any time people are misusing their public lands,” he said.

“We try to manage for the benefit of current and future generations, and one person’s negligent use of public land with a grow operation can affect a lot of people.”