The older one gets, the more one gains and the more one loses. “All power to the paradox,” my old friend Jack Mueller would say. The gains are significant. One becomes not merely a senior, but an elder. One whose broad experience and depth of knowledge is often sought by those younger, still inexperienced or merely mired in the rush of quotidian concerns.

The hardest losses are those of friends, or mentors you considered friends. 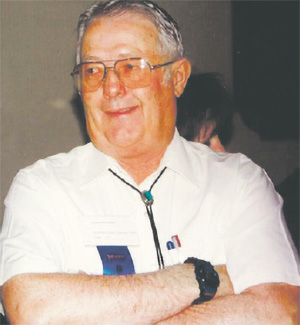 John Porter, former manager of the Dolores Water Conservancy District, a member of numerous boards, and an expert on water issues, died Dec. 28 in Cortez.

I didn’t know John Porter all that well. We lived more than a hundred miles apart. He was what my old Earth First! pals would have called, a “water buffalo.” That’s how I met him, as a member of the Southwestern Water Conservation District. I was a crusading Green county commissioner tasked by my enviro-leaning constituents to “clean up” the dam-building good-old-boy water establishment in our far corner of the state.

Wisely, I moved slow. Attended meetings. Read a lot. I was inspired in that former Colorado Supreme Court Justice Greg Hobbs was a classmate of mine at a Catholic seminary in California. He remains one of the most eminent authorities on Colorado Water Law. I was arrogant enough to think a crash course in my case might boost me up to cruising speed.

But the demands on local political office were far too many and too diverse to try to take on water, the most slippery of subjects in the public estate. I deferred to appointees and surrogates, though I kept a big toe dipped in the larger pond.

Water buffaloes, like their prairie doppelgangers, are formidable creatures. Trying to oppose them is like trying to stem a stampede with a fly swatter. So, out of necessity, outgunned, I had to listen to them. And listening to John I learned far more than I could have imagined. He was knowledgeable about all things water, but never condescending. He voted as his peers and colleagues wanted, though he was always willing to talk with those opposed, to hear them out. And he did his best to explain the mindset behind what seemed to many of us at least anthropocentric, if not downright humanistic bullying.

But John cared deeply about people. His Four Corners people. Family and friends, ranchers and farmers, townsfolk and indigenous tribes – people he knew who’d worked hard all their lives to make a go of it, through droughts and floods and economic depressions, sometimes against incredible odds.

Unlike some of his peers, he heard the eco-arguments some of us made, and saw some merit in pulling up a chair to the table for us to join the discussion. He urged us to roll up our sleeves, put aside rancor and get to work. He took pride in getting all sides brainstorming together to come up with more nuanced courses of action. Reciprocally, I enlisted his aid in coming to my liberal county and getting citizens to understand the need for water storage in our desert environment. Maybe not in the old Bureau of Reclamation big-dam way, but selectively targeted with sensitivity to environmental concerns.

I grew to love John Porter. He was the unsung Western hero — not out on the barricades waving flags or barging into meetings tongue blazing. He took his time. Moved carefully. Made friends of enemies. Never lost his integrity. He compromised on strategy, not on principles.

I came to understand John Porter was the best of water buffaloes. Bless him.

Art Goodtimes, who is recovering from a bout with cancer, writes from Norwood, Colo.