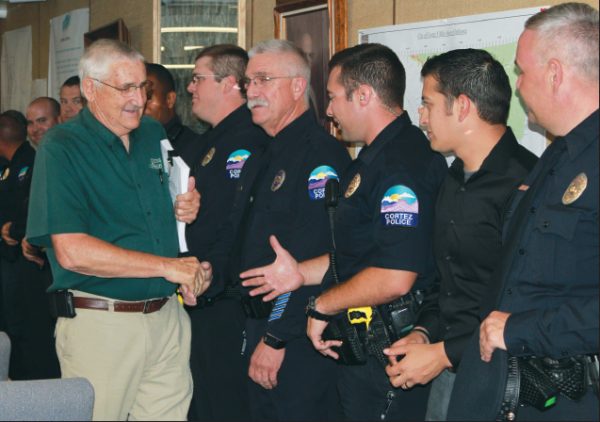 The entire Cortez Police force turned out June 28 to honor Chief Roy Lane during the city-council meeting. He was presented with the Charles K. “Pat” Steele Award, given to exceptional police chiefs in Colorado. Photo by Lori Johnson

Getting a citation in Cortez doesn’t usually involve the entire police force, but this wasn’t a speeding ticket or any other routine matter. It was, in fact, recognition for a job well done.

Witnessed by dozens of uniformed men and women who crammed into city council chambers June 28, Chief Roy Lane was presented with the Charles K. “Pat” Steele Award, named for a late Loveland police chief renowned for his inspirational leadership.

Nominees “must have maintained high personal and professional standards,” state the criteria of the Colorado Association of Police Chiefs, and “holding forth these values and ethics at times of unpopularity, difficulty and adversity shall cause greater consideration.”

And given those considerations, Lane — the longest-serving chief in the state of Colorado — was a slam-dunk.

Among other challenges during his 35-year tenure, Lane had shepherded his department through one of the toughest times imaginable, the murder of Patrol Officer Dale Claxton. In 1998 Claxton was ambushed by a self-styled survivalist wielding an automatic rifle, one of three suspects who also shot and wounded officers from other agencies while fleeing into the wilds of Utah.

Lane began his career in Winslow, Ariz., as a 21-year-old rookie and also served as chief in Holbrook, Ariz. He became Cortez police chief in 1981. In a letter of nomination, Bayfield Marshal Joseph McIntyre noted that Lane has been a police officer 50 years, 41 of those as a chief. “He has earned the respect and admiration of his staff, community and his colleagues from the South West region,” McIntyre wrote.