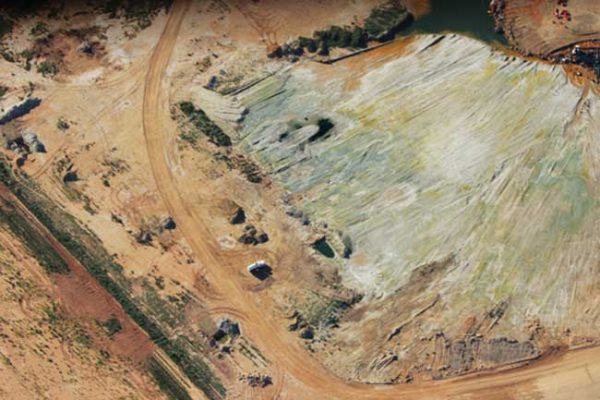 During its 38-year operating history, the White Mesa uranium mill near Blanding, Utah, has produced more than 45 million pounds of vanadium — or over $500 million of vanadium at today’s prices, according to Energy Fuels. Company officials believe the dissolved vanadium in the settling ponds can be recovered using existing equipment and process streams at the mill, similar to how dissolved uranium is currently recovered from the same brine ponds. Photo by Angelo Baca.

Energy Fuels, Inc., the Canadian uranium-mining company that owns and operates the White Mesa uranium mill south of Blanding, Utah, is set to resume recovery operations for vanadium pentoxide from ponds at the mill.

Vanadium has the potential to be a lucrative venture for the mill. But the prospect has many environmentalists and members of the Ute Mountain Ute Tribe, whose reservation borders the mill, very concerned.

The White Mesa mill has a long history of conventional vanadium recovery. In 2013, it produced 1.5 million pounds of the rare metal, a small portion of the 45 million pounds it has processed over its 38-year operating history. When market prices slowed after 2013 vanadium mining and milling became economically untenable. The company stopped production. Two years later the metal bottomed at $2.50 per pound. But today it sells for $15 per pound as the exploding worldwide demand for vanadium swelled its market value more than 400 percent in the last 24 months.

The company has identified significant concentrations of dissolved vanadium in solutions found in the settling ponds at the Mill, ranging between 1.4 and 2.0 g/L. Based on current estimates, the Company believes these pond solutions, which result from past mineral, uranium and vanadium processing campaigns at the Mill,

Curtis Moore, Energy Fuels’ vice president of marketing and corporate development, told the Free Press that the company estimates the pond solutions contain as much as 4 million pounds of dissolved vanadium. They hope to recover an eighth of it during the first year.

“White Mesa Mill is also the only facility in the U.S. capable of producing vanadium that comes from mines – as has been the case for a number of years,” Moore explained in an email referring to the plethora of nearby Utah and Colorado uranium/vanadium mines also owned by the company.

Vanadium is a rare metal that is strong, resistant to corrosion and stable against alkalis, acids and salt water. It is typically produced from steel smelter slag and heavy oil flue dust, or as a by-product of uranium-mining and has the ability to make things stronger, lighter, more efficient and more powerful. Adding 0.5 percent vanadium to steel doubles its strength. Although it has been used since the late 1800s in steel and other alloys, new global steel-industry standards are requiring more vanadium in construction steel to ensure safer buildings.

China’s response to recent earthquake damage in the western part of the country, and Japan’s recovery from the Fukushima nuclear disaster, resulted in policy changes in those nations requiring steelmakers to boost the amount of vanadium in rebar product to create a higher tensile strength. This sent the vanadium market into turmoil as steelmakers worldwide exhausted all existing inventories.

Vanadium had been a relatively small market, with annual production of 75,000 to 80,000 tons per year and of that, about 85 percent has always been used in steel production. But new applications, such as large-scale community renewable energy storage, and increased research and development like emerging space exploration alloy materials, have spurred demand for more production.

Efficient mass storage has been renewable energy’s biggest challenge. Before the recent invention of the Vanadium Flow Battery, known among energy wonks as the “VFB,” any renewable energy not used immediately in the grid was lost. The industry needed reliable, large-scale storage capacity before renewable wind and solar could be serious competitors in energy markets. The VFB is the answer, and it is being used to store energy from 100-megawatt projects all over the world today.

The VFB is chemically and structurally different from other batteries. It can run tens of thousands of cycles without wear and tear. It does not self-discharge while idle or generate high amounts of heat when charging. It can charge and discharge simultaneously, and can release huge amounts of electricity instantly ― over and over again, for up to 20 years.

Today it is the only battery ca­pable of powering everything from single-kilowatt uses, ideal for single-home and commercial applications, to the megawatt hour capacity demands of a pow­er grid. It’s also ideal for stand-alone storage systems for solar/wind farm installations.

Vanadium pentoxide is the lead substance in Vanadium Flow Batteries. Its application to energy storage is now creating substantial growth in renewable-energy projects and compatible storage systems, an industry that was predicted in the Piper Jaffray Energy 2009 report to swell to $600 billion by 2020.

In an interview with Peter Clausi, InvestorIntel, Lee said, “Today’s solar and wind generating capacity amounts to over 700 gigawatts. That is equivalent to seventy nuclear power plants or seventy Hoover Dam hydro plants. It was less than 100 gigawatts seven years ago. You are looking at 700 percent in growth.

“Unfortunately up to 50 percent of the wind and solar energy has gone unused because by nature they are unpredictable resources. The interesting point today is that the VRB utility scale grid batteries only amount to two gigawatts, less than three percent of this [existing] renewable capacity. There’s a lot of room to catch up and. . . you could have 500-700 percent growth in the next few years in grid-scale batteries. Vanadium, as the metal of choice for grid storage batteries, would require an exponential increase in supply.”

But environmental groups and Native American tribes located near uranium-extraction projects on the Colorado Plateau remain worried about the potential dangers of new processing efforts at the White Mesa mill, after ugly experiences in the past that exposed uranium workers, residents and tribes to uranium toxicity from mining, milling and waste.

Amber Reimondo, energy program director at the environmental nonprofit Grand Canyon Trust, told the Free Press the trust is not working directly on vanadium-mining at this time. “I’m not sure of anyone who is,” she said.

“For what it’s worth, it’s mined alongside uranium from sandstone deposits, like those in southeast Utah. So, while it’s not a mineral that our group specifically focuses on, we view vanadium-mining in the region through the lens of uranium –  meaning at the very least, because of its association with uranium, vanadium-mining and processing at the White Mesa Mill creates environmental risks similar to those created by uranium-mining. Given the poor record of the industry in the region, it’s not an operation we support.”

In a recent statement on the vanadium program, Mark Chalmers, Energy Fuels president and CEO, was optimistic about the new venture, saying, “If this [the pond recovery project] is successful, Energy Fuels would expect to become a commercial-scale vanadium producer for the next few years, just from pond solutions.

According to a company statement Energy Fuels owns a number of mines in Utah and Colorado that contain large quantities of vanadium resources. It is exploring additional vanadium opportunities beyond the pond recovery project, including the potential of its resources at the Whirlwind Mine and the La Sal Complex, which recently received government expansion approvals.

“Our mill last produced vanadium in 2013. We have a number of mines in Utah and Colorado that contain large quantities of high-grade vanadium,” Chalmers explained.  “For longer term alternatives, we are evaluating other vanadium production, including the processing of previously mined uranium/vanadium stockpiles in the vicinity of the Mill, processing other vanadium-bearing streams, and, with improved uranium prices, the re-initiation of conventional uranium/vanadium mine production from certain of our mines that contain large, high-grade vanadium resources, including the La Sal and Whirlwind mines which are currently on standby.”

In a recent effort to put more muscle in demand for U.S. uranium production Energy Fuels exercised the Trade Expansion Act of 1962, Section 232, designed by Congress to allow the president to adjust trade for national security purposes.

Chalmers is hopeful that the uranium 232 petition, submitted January 2018 to the U.S. Department of Commerce, will reduce the quantity of uranium coming into the U.S. from state-subsidized enterprises in Russia, Kazakhstan, Uzbekistan and China.  The countries represent a threat to U.S. national security, the petition claims, and if ignored, that dangerous threat will become even more dire in 2018 and beyond. The Petition seeks a remedy setting a quota to limit imports of uranium into the U.S., effectively reserving 25 percent of the U.S. nuclear market for U.S. uranium production. Less than 3 percent of the uranium consumed in the U.S. is produced domestically, yet the U.S. is the largest uranium consumer in the world.

Of concern to Uranium Watch, an education and environmental advocacy group based in Monticello, UT, is the possible restart of the La Sal Mines complex for the production of vanadium. The group has been working on issues related to the environmental impacts associated with uranium milling in Utah, including at the White Mesa mill for more than ten years. Sarah Fields, program director for U.W., told Free Press that the location of the mine is very close to the small La Sal, Utah community. “The Beaver Shaft portion of the complex emits radon gas one quarter-mile from the La Sal Elementary School, post office, senior center, and store. The La Sal mines should never reopen,” she said.

The fact that vanadium contributes to clean-energy storage and stronger, safer steel construction doesn’t reassure Regina Lopez Whiteskunk, a member of the White Mesa Ute Tribe ten miles south of the mill location. “It’s ironic,” she says. “Today’s usefulness will mean waste tomorrow. What will that future disposal look like? Is possible contamination the tomorrow our grandchildren will inherit? That is not the kind of inheritance I want to leave my grandchildren.”

In an email reply to the Free Press, Moore said the company believes the dissolved vanadium in the ponds can be recovered utilizing existing equipment and process streams at the mill, in a fashion similar to how the mill has been recovering dissolved uranium from the ponds.

Asked if uranium effluents would be disturbed during the first phase of vanadium reclamation, Moore replied that the company is “simply recycling our water. There are not contamination concerns with this project.”

Whiteskunk, a former White Mesa/Ute Mountain Ute council member, now an activist and author, wants to know more. “What is that process, and what is the plan for the supposed cleaning of the water? Send the plan to the Utes,” she said.

The company will evaluate its actual 2018 vanadium costs and recoveries, and depending on the vanadium market, would expect to continue vanadium production from pond returns in 2019 and 2020. Energy Fuels would only continue vanadium recovery operations at White Mesa Mill in subsequent years if vanadium prices continued to be strong enough to justify production.

It should also be noted, Moore said, that because the company’s analysis has not yet been proven at full-scale production, the ultimate outcome is uncertain.