Shonto, Ariz.: The little town that could

Shonto, Ariz., in the Navajo Nation, is a “can do!” community. Residents see themselves as participants in their own economic development and contemporary projects such as their solar/wind stand-alone-unit manufacturing plant. It is owned and operated by the people of the community, because they are certified by the Navajo Nation government to do business for themselves.

Ten years ago, Shonto became a certified chapter after elected officials acted on a resolution to apply for not-forprofit status. The process of certification is rigorous, especially at the beginning 10 years ago when Shonto was the first chapter to accept the offer. Until then all business flowed to and from Navajo central government, which then provided funds to local communities in a trickle-down fashion. 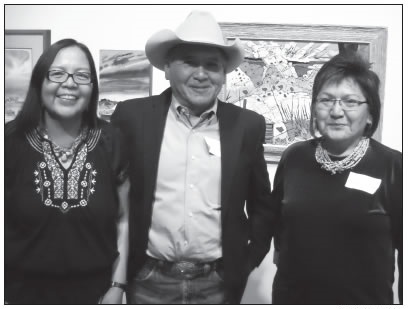 Larissa Jackson, Bahi Whitethorne, and Elizabeth Benally, all of Shonto, Ariz., celebrate at a recent opening of Whitethorne’s paintings. Whitethorne will be the featured artist at the Rock the Canyon Arts and Music Festival June 12 in Shonto. Photo by Sonja Horoshko

Certification, however, jump-started a surge in independent thinking out on the rez. Gradually, chapters are following Shonto’s lead, becoming certified in order to enter into projects that can be owned by the chapter community and run by a local board of directors.

Since Shonto earned the not-for-profit status, its industrial development projects such as the solar/wind hardware manufacturing plant are out of the research and development stage and into the build-out for completion this summer.

Shonto’s projects are not all work and no play, though.

“In the winter of 2008-09, a group of us walked down into the bottom of the canyon near the old boarding school. It brought back a lot of childhood memories,” said Elizabeth Benally, current chapter secretary-treasurer. “While we looked at the old stone buildings, the wash and the sandy beaches beside it, someone said we should make a music festival here. It was our ‘Should Do’ stage, the one that happens in a moment of inspiration. We should do this! And then it gets born.”

Quick planning brought a crowd of nearly 200 to the first Rock the Canyon Shonto Arts and Music Festival, held in May 2009. After the festival tents came down, Benally said, “We proudly put it, ‘We did . . . Rock the Canyon!’”

The success was due, in part, to a collective show of Shonto hands — a stage built entirely of donated materials and labor which, because of constant, enthusiastic use throughout the day, needed quick structural repair by mid-afternoon.

The Rock the Canyon Community Governance Board of Directors also applied for a $10,000 start-up grant. It was easily matched and has become the start-up budget for this year’s event, which opens for a day of fun on June 12, from noon to midnight.

Although the design isn’t finished yet, Benally says the T-shirt this year may read, “We Did,” on the front, and “Rock the Canyon, 2010” on the back.

The featured visual artist is Bahi Whitethorne, an accomplished painter and children’s book illustrator. He will be exhibiting original paintings, prints and recycled art for sale in his booth.

Whitethorne is known throughout the Southwest and Europe for his colorful cultural content. He is a member and president of the Reunion of the Masters, a group of professional painters headquartered at the Gallup (N.M.) Cultural Center.

The Shonto community is also known for its charming location north of Highway 160 on the way to Page, Ariz., in gentle pinon-juniper canyon country.

There, nestled in front of the varnished red rocks in the bottom of the deep Shonto canyon, stands the remains of a boarding school that was Whitethorne’s childhood educational home.

“Even though our family lived just up there above the canyon I was enrolled in the boarding school at the bottom and had to live there while I was at school,” he recalled. “The road down into the canyon is called the, ‘I don’t want to go to school’ road, because of the harsh circumstances in those days.”

That school was replaced in the 1960s by a new school in town on the mesa above the canyon. “The road to that school is the ‘I want to go to school’ road,” Whitethorne says, because it is a good place to learn, and a successful school for students, community and faculty.

But the stone buildings of the old boarding school still stand in the bottom of the canyon, circled by towering cottonwood trees. A plaza in the center provides a natural opening for stage and seating, and easy access to food vendors.

Last year, while windstorms raged over the mesa on top of the canyon, people in the bottom of the peaceful, shady canyon rocked until midnight.

Once again, the stage this year is open mike for Native American bands and entertainers. James Bilagody, entertainer and comedian, will be master of ceremonies, and arts-and-crafts and food booths are expected to multiply.

“People are encouraged to camp if they want to stay through the night. We expect the Hopi Clansman to show up later in the night,” said Benally.

“Best of all, this year admission is free. We just want to get people here, play some of the games, smile, and enjoy the festival with our community.”

Search Google Maps for directions to Shonto and for more information call 928-206-9992.