Cortez Police Sgt. Dennis Spruell is nothing if not single-minded when it comes to his career path. At 52, he may be getting a little long in the tooth to be running fleeing suspects to ground, but that doesn’t mean he’s fallen out of love with being a cop.

“When I first applied almost 30 years ago they asked what I wanted to do. I said, ‘Someday I want to be sheriff of Montezuma County,’ and some day is now. Being a patrolman is kind of a young man’s sport. I’m getting to the end of my career, and I tell you I have loved law enforcement. I eat, sleep and breathe law enforcement. I think it’s an honorable profession and I want to bring that to the deputies of the sheriff ‘s department so they can feel the passion for the job and the community that I do. 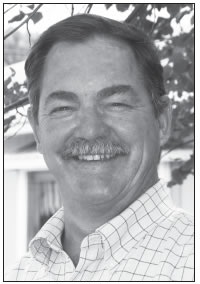 “I love being a cop and I don’t want to give it up, but there comes a point in your life where you say, I’m just too old for this.”

His experience includes a variety of assignments, from patrolling City Park for illegal drinkers to setting up drug buys as part of the 22nd Judicial Drug Task Force, which includes officers from several local agencies. For the past four years he has been project director of the drug task force; he had to step down from that in order to run for office.

“I’ve done everything a police officer typically does – I’ve had three working police canines, I’ve been a hostage negotiator, bike patrol, and a supervisor for 22 years.”

With his wife he owns Cortez Animal Bed and Breakfast, which has taught him to manage a budget. “I get along well with people and dogs,” he said, “and I understand law enforcement. I have the business experience and the leadership experience – 22 years as a supervisor. I never received an evaluation less than outstanding in my entire career.”

Spruell said he is especially proud of his work on the drug task force – an entity that now faces a precarious future because of a drop in federal funding.

“When I first started [in 1999] we were doing five meth labs a year and the last four years we have not had a meth lab.” He said that dramatic result came in combination with the country’s restriction of access to medicines such as pseudoephedrine that are used to make meth.

“Over the last three years, I personally arrested 103 methamphetamine dealers – not users, dealers — they were charged with distribution of methamphetamine — so I’m pretty proud of that accomplishment.”

“The last couple of murders that we had revolved around narcotics, specifically methamphetamine. During the Rael case [in which Michael Rael murdered Diane Cordova of Cortez], I received a phone call that night at home and a lady said, ‘You just had a murder.’ I said, ‘We did?’ and she said, ‘Yes, you did. and your suspect is Mike Rael and he is at. . .,” and she gave me the address. I was able to give that information to the detective division.

“That was one of the three cases when I believe the drug task force was able to help corroborate and solve murders because of our great informant base.”

Spruell said he would never claim that the War on Drugs is winnable. “I would never say that. I don’t believe we’ll ever win the War on Drugs. I believe we need to stay in the fight. If we fall back and let them take over, the crimes that are going to pop up because of the rampant methamphetamine use will only exacerbate.”

He believes the vast majority of identity theft and check-fraud cases locally are related to methamphetamine abuse, although he admits those crimes are committed because users need money to get their drug, not because the drug itself induces them to commit crimes.

Still, Spruell believes drugs need to remain illegal because of their harmful effects on individuals and society.

“If it were marijuana, and I am not an advocate of legalizing marijuana, I wouldn’t probably have a problem with it because we spend way more money fighting marijuana than is necessary.

“Back in the olden days, the government came out with a commercial saying if you take a hit of marijuana your head’s going to explode. We all know that’s a crock of crap. You may have Cheeto stains all over your hands but your head is not going to explode.

“However, methamphetamine is a different drug. It can be used one time and it can cause addiction. To legalize methamphetamine and say, ‘let people be people, if they destroy themselves so what,’ is all good in theory but when people take meth they change. They become different people. Grandparents are raising grandchildren right now because their kids are on methamphetamine. If it were legal would that make it any better? I don’t think so.

“Alcohol by far is our worst drug because it’s legal so more people are using it, so if you legalize all drugs there are going to be more people who try it.”

However, Spruell believes in 10 years marijuana will be legal, but not other drugs. “I think it’s the wrong message and it’s going to open the doors to something we cannot control.”

Although meth use and the crimes that stem from it are huge problems in the county, there are many other crimes to be tackled, and Spruell said he wouldn’t minimize any of them.

“I don’t prioritize any of the crimes. However, I would allow my deputies to make traffic contacts. I have a memo from the [current] sheriff saying that he doesn’t want them to make contact unless it’s very blatant violation of the law.”

Spruell has a different philosophy. “I feel that we can get a lot of criminals off the street by doing traffic contacts. Three weeks ago, one of my officers pulled a lady over for weaving, thinking she was drunk. She wasn’t drunk, but he could tell she was a methamphetamine addict. He asked permission to search and she allowed him to search, and he got methamphetamine, marijuana and illegal pills off her.

“Three days later, I see a guy at 1:15 in the morning riding a bicycle with no headlights. I am not going to write this guy a ticket for riding without a headlight; however, I would like to talk with him. I said, ‘Hey would you talk to me?’ and he immediately took off.

“He was chased down and we finally caught him. He was carrying an 18-inch bowie knife and he had two felony marshal’s warrants.

“Both of these people would never have gone to jail if the sheriff ‘s deputies followed the directive not to do traffic stops unless for blatant violations.”

Spruell said he believes a change is needed in the sheriff ‘s office because, “Right now the guys are micro-managed to death. They’re required for every shift to advise the sheriff and undersheriff what they did. If they’re given a job they’re stood over and every minute they’re watched.

“I am not a micro-manager. You have to allow these guys to make a mistake and if they do, they’re going to learn from it.”

Spruell said he is fortunate in that he has worked for the past 29 years for Chief Roy Lane, the longest-reigning police chief in the history of Colorado. “He gives you a job; how you accomplish it is up to you. It works for him and I hope that it’s going to work for me.”

Among the challenges the new sheriff will face is the sunsetting of a 0.45-cent sales tax allocated for the jail. “It’s going to be so tough, but we’re just going to have to deal with it,” Spruell said, adding that he will look at ways to reduce the jail population such as alternative sentencing and home detention.

“I will have to work with the commissioners to get the money to keep it running the way it needs to run,” he said.

Interestingly, Spruell said, the No. 1 question he has been asked at forums is not about the budget or crime but about the possible intrusion of the federal government into local matters.

“What I found out was the sheriff is the ultimate law-enforcement authority in America because he’s elected by the ultimate power, the people,” Spruell said.

Specific questions involved “Second Amendment rights, the BLM locking gates and we can’t ride our four-wheelers on these roads any more, things like that,” he said.

“If the BLM puts a gate across a road someone has been using for 30 years and they can’t get to their land, that could be criminal, or an FBI agent could want to go in a house without a warrant and the local sheriff can say, ‘No, sir, that’s a violation of the Constitution.’ And that’s a big place that the sheriff may step in.”

He advised voters to “listen to the candidates and then talk to anybody in law enforcement, talk to the Cortez Police Department, talk to the communications center, search and rescue, the posse, the fire departments — ask them who are they going to vote for and why.

“And if they’ll do that they’re going to vote for me for the next sheriff.”