The aesthetic crossroads of Gloria Emerson

Gloria Emerson closed the doors of her Shiprock, N.M., coffee shop and gallery just after Christmas. It was known to regional collectors of art and poetry as a hub of cultural and political consciousness and aesthetics. Painters and writers that she presented there, across the bridge in a small, retail shopette, are considered the A-Team of reservation expressionists — the La Bohème of the Navajo.

Like many entrepreneurs gifted with the acuity to find, befriend and present edgy, living contemporary artists, she knows what’s out there because she’s one of them. 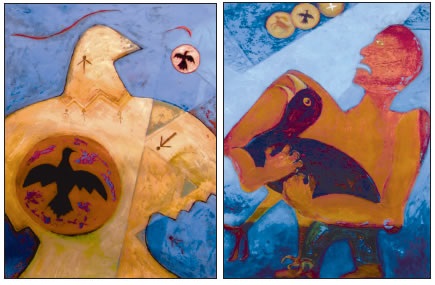 A diptych by Shiprock, N.M., artist Gloria Emerson. “Manifest” is on the left and “Destiny” is on the right. “Manifest” represents hope and pride; “Destiny,” bitter experience.

“I may be the oldest Diné woman painting today in what I call cultural expressionism.”

The diversity of contemporary life on and off the reservation surrounds Emerson’s quests, creating a politically charged milieu from which she extracts experiential truth in painting and writing content.

In her essay, “A Realist View of Image Politics, Reclamation of the ‘Every Indian’,” art critic Nancy Marie Mithlo writes, “Emerson articulates her motivation as a producer of Native imagery as a personal and communal endeavor….It is clear that she locates herself as an active agent within her society.”

During a recent workshop with a select invited group of Native women working in the arts, she was affectionately labeled by them as “an angry artist.” She doesn’t deny the content of their language, but reconfigured the comment, saying back to them simply, “I am your elder.”

As Emerson prepares to turn 71 this spring, she feels the urge to focus her intentions. “I will decide on February 15 which path to pursue — painting, writing or political activism. I hope to have a stroke of illumination then about continuing the [coffeehouse] business and if so, how I can do it in an affordable form.”

Why choose when it is exactly this weaving through multiple genres that is the heart of her work. It parallels the modern complexity of her life. Language, paint, politics.

In 2004, Emerson wrote an artist statement for work published in the book, “Contemporary Native American Art: Reflections after Lewis and Clark,” “I am interested in layering paints, using clashing colors to vibrate around me like those hated oil rigs and transformer lines. I layer paint and colors and mix media until the paintings reach a kind of geography, landscapes that come into their own imperfection.”

One of the original culture workers of the late ’60s, she cannot escape the “project” approach to a creative life. All painting and writing begin with a conscious issue at the core.

“In painting I try to depict mythic time juxtaposed to video time, myths crashing, cascading and reappearing as shadows in the landscape. My paintings are contrived, uncontrived, conscious, unconscious struggles dipping into ancestral memory codes, spinning out yarn that becomes dabs and strokes of paint.… It is really harder to paint now that my vision ages and strokes fossilize.”

But great strength informs her work…and large, abstracted, fundamental subject matter — the landscape of the Navajo reservation amplified by her rigorous pursuit of political / social and academic experience beyond the borders.

Emerson graduated with a master’s in education from Harvard and followed that with work at the Institute of American Indian Arts in Santa Fe, N.M.

In 2003, Emerson was selected as artist-in-residence at the Indian Arts Research Center of the School of American Research, also in Santa Fe. “I submitted a proposal to paint these places around me. The three-month residency included a wonderful stipend and purchase of materials. That’s when I bought myself a new easel and painted as quickly as possible creating a body of 20 new works in three months. At the showing I sold 18 of them. It was incredible.”

Following that success, the SAR Institute asked to publish a book of her poetry and writing using the placebased paintings as the pivotal inspiration.

“I scurried about because I decided to make this poetry, though I had never taken a poetry class in my life. Although I regret that, maybe if I had, I wouldn’t have done what I did.”

The book, “At the Hems of the Lowest Clouds,” camouflages place. Some Navajo people will not read the book because, as Emerson admits, “They believe I have trivialized the traditional story of these places. How could I be so self-centered, egotistical to think that I could make up story of place? It is divine. It comes from the Holy People. To some Navajo readers it is just a lot of mumble-jumble, but that’s fine with me.”

In the forward, M. Scott Momaday wrote, “When I first heard Gloria Emerson speak, I recognized her spirit. It wasn’t what she said… it was the dignity and self possession with which she spoke, and it was the profound silence from which her words emerged.… One must listen to the silence, one must understand that silence is the matrix of language. One must understand the sacred aspect of words and the original, creative nature of story and storytelling.”

Like the language and the life Emerson makes up on and off the reservation, her paintings silently cleave content in half, exposing the visual polarity of issues in quiet imagery. In the diptych “Manifest Destiny,” the left panel, Manifest, is hopeful, innocent, proud; the right panel, Destiny, is real experience, raw, painful.

Her palette is of the earth — blue atmosphere and time; red shadows and heartbeats; yellow light and place; green nourishment and age splitting open at the visual, literary and intellectual crossroads.

Her gesture like old nodding sunflowers, whispering from a deep far away. Same rhythm, same motion, Fading back into distant Phosphorous mountains. Singing farewell To those deaf to the songs of sunflowers Nodding in the rain.

The decision Emerson is about to make seems at first to split her tools — loaded brush or pen; loaded politics and activism or loaded exhibition space for thriving artists. But we can hope her choice will cross the borders of creativity in a powerful form yet to be realized, a fresh merger of approaches to the manifest forms of Emerson’s perceived creative conundrum. It is her destiny to represent and continue transmitting the highest principles implicit in artistic endeavor.

May it be a peaceful and productive, fluid, long journey for her.