The long, hot summer: Drought hits parts of the region

Montezuma County is feeling the heat, with more than half of the days in August hitting the 90-degree mark and less rain falling on thirsty crops.

Last month, the U.S. Department of Agriculture declared farmers here eligible for certain loan relief because of the county’s proximity to drought-hammered parts of Arizona. Also eligible for the relief are both New Mexico and Utah’s San Juan counties, as well as other counties in both states. Shared borders can equal shared woes — it is hot and dry in the Four Corners. 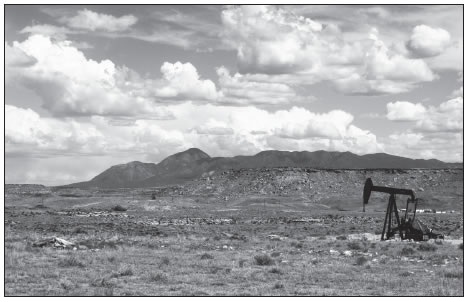 Storm clouds gather over the Sleeping Ute Mountain as seen from near Aneth, Utah, in late August. Many storms missed Cortez during the normal monsoon time. Photo by Gail Binkly

As to Cortez, though, the word from National Weather Service is mixed: Month-tomonth since the current water year began last October, Cortez has swung between below- normal precip to well above, then back again, especially in June, which saw only 0.01 inches, compared to the average of 0.54.

As of Aug. 24, the Cortez area had received 5.03 inches of water for the year, according to local weather observer Jim Andrus. The average moisture for the year on that date is 8.72 inches, leaving 2011 at 43 percent of normal.

Throughout the usual monsoon season in late July and August, Cortez residents saw plenty of clouds but only spatters of rain. “It’s been a drier monsoon season for us,” Andrus said. “We’ve got the monsoonal humidity, but it’s a question of where storms will unload the rainfall when they do arrive. A lot of storms have been missing Cortez.

It’s like throwing a deck of cards into the air. You don’t know where the cards are going to land on the ground.”

A strong La Niña weather pattern is driving storms north, said meteorologist Jim Pringle of the National Weather Service in Grand Junction. While La Niña has left Cortez a bit more arid than usual, she’s brought near-scorched earth in Texas, most of which is considered to be under “exceptional” drought conditions.

“It’s really bad for them,” Andrus said. “It’s been about the worst for them since the Dust Bowl days of the 1930s.”

Parts of Arizona, Utah and New Mexico are also in drought. In Clovis, N.M., the lack of rain has led to a lack of feed for livestock. The Associated Press reported Aug. 15 that livestock sales there have nearly tripled. Ranchers are selling because there is no grass for their cattle to graze, and feed is at a premium.

According to the University of Arizona’s climate study for August, drought conditions in Arizona and New Mexico waned slightly, but remain “widespread and intense,” while a strong pressure ridge raised temps to 2 to 8 degrees above average.

“I think a lot of why certain areas of the southwestern United States have been dry, and others not, can be explained by the El Niño Southern oscillation pattern,” the weather service’s Pringle said.

The pattern dictates the track of storms — whether a northern-moving La Niña, a southern-moving El Niño, or “Niño-neutral,” he explained.

“We’re watching it very closely,” Pringle said. “There are a lot of implications if we go back into another La Niña this winter. It’s a little too early to say for sure if we’re going to be into that or a neutral pattern, which looks right now to be the two possibilities this winter.”

Based on measurements volunteers collected at Cortez Municipal Airport, October 2010 was above normal, with 1.54 inches of water received. November lagged behind — 0.36 inches compared to an average of 0.92. December was another high month, with 1.81 inches vs. an average of 1.07, but January plummeted to just 0.11 inches, far below the normal of 1.05.

But rains slammed the area in April and May, which both saw 1.19 inches. In June, things were back down again, and July, at 0.92 inches, was behind its normal moisture content of 1.25 inches.

“It wasn’t that far off normal. We did have some dry months, but we had some abnormally wet months,” Pringle said. “The further north you go across western Colorado, the wetter it has been, generally speaking.”

Rainfall has also varied from point to point in Montezuma County, he said, sometimes significantly.

“The monsoon is still in place; it’s just a matter of where the main plume is,” he said, adding that the area could get a weather pattern vulnerable to monsoons early this month. But whether Cortez and surrounding areas see a significant surge is “the question mark,” Pringle said.

“It’s just a matter of whether there are big surges, or little spurts in Southwest Colorado.”

Water users have not been left high and dry this summer, says Mike Preston, general manager of the Dolores Water Conservancy District.

“We’re going to meet all allocations this year, in terms of our obligations,” he said. “We filled the reservoir this spring.”

The district oversees McPhee Reservoir, which serves farms north of Cortez, to Yellow Jacket and Dove Creek along the Highway 491 corridor, as well as Ute Mountain Farm and Ranch Enterprise. The reservoir also supplies municipal water to Cortez, Towaoc and Dove Creek.

Inflows to the reservoir between the key period of April through July stood at 260,000 acre-feet. The 30-year average is 320,000 acre-feet for the period, so this year, McPhee is at 81 percent of average in terms of the amount of water that came in.

That was enough to fill the reservoir, and release about 58,000 acre-feet downriver for rafting and ecological work, Preston said.

“The reservoir was full, and we were spilling until June 25. We had a late start to the irrigation season, so we were able to keep the reservoir full,” he said.

The 260,000 acre-feet surpassed the 235,000 forecast for the period in May. Storms at the end of that month boosted the water supply, though, Preston said.

“What really turned this from what could have been a low spill year … was those late storms that we got in the month of May. Otherwise, it could have been touch and go as far as filling the reservoir.”

The conservancy district plans a few years in advance, always trying to carry over as much water as possible from year to year — sort of a “non-rainy-day” fund.

“We started out in pretty decent shape even before the runoff, because we’ve been carrying water from previous years,” Preston said. “This year, we didn’t even have to start using the reservoir storage until the latter part of June. … But an 81-percent year without that kind of storage could have been a problem.”

Irrigated crops in the county appear to be holding on, according to information from the Colorado Agricultural Experiment Station/Southwestern Colorado Research Center in Yellow Jacket. Dryland crops are experiencing more difficulty.

“So far, we have about 6.8 inches (of water) from January to now. Normally, we’ll get close to 10 inches for a normal-year average. For the year, we are only about 42 percent of an average year.”

Winter wheat did “surprisingly well,” he said, though kernels were on the small side.

As for dryland beans, some fields are OK, Berrada said. Irrigated beans are doing fine — though farmers might have to continue irrigating, unlike last August, when rainfall was above average.

“We have to irrigate constantly. I’m not sure we’re keeping up with the demand,” Berrada said.

“The dryland crops, I’m sure, are not as high-yielding as they could be. The winter wheat was not bad, but spring wheat is being harvested now. Beans are probably low, and sunflowers – it’s too early to tell yet.”

Irrigated sunflowers, like irrigated beans, are doing better than their dryland counterparts, which Berrada said are “hanging in there.”

“We planted on fallow ground. It benefited from the moisture already in the ground. But it can badly use rain now.”

Without additional moisture, he expects an average harvest at best, and possibly below-average. “Everything is going fast, because we’ve had some warm weather and dry weather,” he said.

Although the first cutting of alfalfa had a lower yield than average, the quality is good and the prices “excellent,” Berrada added.

“We’re definitely dry,” agreed Andrus, “but we can limp along.”