The people’s voice: Cortez library events tap into a ‘hunger for poetry’ 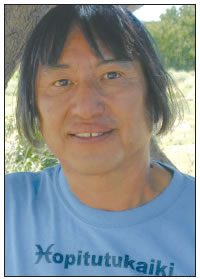 Poet Ramson Lomatewama will be this month’s presenter in the Cortez Public Library’s “The Poetry Corner Presents” series. Courtesy Photo.

When artist and poet Ramson Lomatewama writes, he draws upon his Hopi background as well as his experience living in urban California for images. “I feel fortunate to have grown up in two worlds,” he says over the phone from Flagstaff, Ariz.

But listeners needn’t be Hopi to understand what he’s saying. “I believe that a poem should speak to a person’s inner mind regardless of cultural images,” he says.

Cortez Public Library Assistant Kathy Berg agrees. “It’s such a unique way of expressing oneself,” she says on the line from her office.

Audiences will have a chance to hear Ramson Lomatewama’s self-expression on Saturday, Nov. 8, when he presents a reading as part of the Cortez Public Library’s ‘The Poetry Corner Presents” series. “We have an actual corner in our library that is a poetry corner,” Berg explains.

In that spot, readers can curl up in beanbag or doublewide chairs with books of verse, select baskets of Haiku to take home, or create poems by moving magnetic words across metal dividers.

When people think about poetry, they often think of the popular classics they may have learned back in school. Most of us of a certain age can recite a few lines from “The Midnight Ride of Paul Revere” or chant, “Quoth the raven, ‘Nevermore’.”

But what about contemporary poetry? How to learn about that?

The idea for the Poetry Corner spent several years “traveling around” Berg’s mind before she organized the first performance last February.

“There’s this hunger here for poetry that nobody tapped or even knew about,” she says. “We’re hoping to nurture and expose all the poets and people who are interested in poetry to other poets in the region.”

When Lomatewama comes to town, he’ll conduct a writing workshop with his reading. He says he considers poetry somewhat like playing a sport. Games have rules, but each player adapts them to a particular situation in his own way. He likes to introduce poetry conventions, then encourage writers to use or twist them to their own needs.

Lomatewama writes his poetry in English, the language of most of his audience. Though fluent in Hopi, he uses that language for his private expressions.

Some poems come quickly; others take longer. “You don’t want to bring the soup to a boil too quickly. You want to take time to enjoy the aroma that develops.”

When he’s not writing, he creates silver jewelry and blows glass. Glass creates forms that he finds himself describing in words.

Lomatewama began writing during a difficult period in his life. An educator on the Hopi reservation in the late 1970s, he enrolled in Goddard College in Vermont to get a bachelor’s degree. Separation from family made Lomatewama homesick. His mentor suggested he keep a journal. That developed into verses that included the landscape and life he knew.

“So many people — like teens — need poetry,” muses Berg. “There are a lot of kids who don’t do sports.”

“The Poetry Corner Presents” will offer a variety of performers after Lomatewama, to reflect the Anglo, Native American, and Hispanic cultural diversity around Cortez. All events are free and take place on Saturdays at the library.

In December, Mesa State College Professor of Ancient Studies Luis Lopez comes from Grand Junction to perform in English, Spanish, and Spanglish. He will present a workshop at 2 p.m. and lead an open mic session at 7 on Dec. 13.

Widely published Cortez poet and retired high-school teacher David Feela (a Free Press columnist) reads on Jan. 10 at 7 p.m. “He is so funny, the way he plays with words,” Berg says. “You just can’t get enough of him.”

For Valentine’s Day, the Four Corners regional performing group Growing Voices offers “For the Love of Your Voice,” featuring Tina Deschinie ( Diné- Hopi), Michael Thompson (Myskoke Creek), James McNeley of Cortez, and Renee Podunovich of Dolores. The performance will be at 7 p.m. and will feature Sonja Horoshko as emcee.

“What’s fun is, after the performance the poets hang around,” Berg says. “They’re so engaged with the audience.”

A group called EAR (for Ellen Metrick, Art Goodtimes, and Rosemary Trommer) will perform March 14 at 7 p.m. after giving a workshop at 4.

“They do some (poems) they’ve written themselves. They perform together, they do a little dancing,” says Berg. “If you haven’t seen them together, you have to come.”

In April for National Poetry Month, The WordHorde, a group of young poets from Western State College in Gunnison, will add drama to a performance at 7 p.m. on April 4 under the guidance of their coach, Mark Todd.

“They kind of dress the part like the Beatniks,” says Berg. “I’m hoping to get more kids from the junior high and high school to show that, this is for you.”

David Lee, first poet laureate of Utah, will present on May 9. Known for his humorous poems, he has begun to write verses which Berg describes as “poignant and beautiful.”

“Poetry changes lives,” says a poem by an unknown author, quoted on a Poetry Corner brochure. “In some cases and places, Poetry saves lives.”

The library is trying to give poetry that chance.

The series is sponsored by the library, First National Bank of Cortez, Tierra Madre Herbs, City of Cortez, and KSJD Dryland Community Radio.