The vapid and the dead

Ambition is a commendable attribute in a debut novelist, as is the courage to take chances, stretching the boundaries of your chosen genre. Combine the two, and the potential for literary transcendence is manifest. So too, alas, is the potential for a very messy splatter. 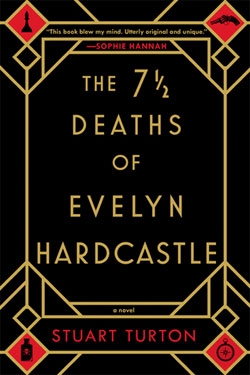 Just when you thought you’d read all there was to read in the realm of crime fiction, along comes The 7 ½ Deaths of Evelyn Hardcastle, Stuart Turton’s dizzying thought experiment in how to bring a fresh perspective – or multiple perspectives – to the venerable trope of the British locked-room murder mystery. Consider:

A lone man stands in a rain-soaked forest. He has no memory of who he is or how he got there. He shouts a woman’s name – “Anna!” – although he knows not why. And then he witnesses what he believes to be Anna’s murder.

The man is baffled of course, and terrified, and then a shadowy figure approaches him from behind, slipping an object into his pocket. “East,” the stranger whispers, then disappears into the trees. The object proves to be a compass, and it leads the man to Blackheath House, a crumbling Victorian-era manse whose owners, Lord and Lady Hardcastle, are hosting a weekend debauchery to celebrate the engagement of their daughter Evelyn; a party that, we later learn, coincides with the anniversary of the murder of Evelyn’s brother.

Evelyn, the man soon discovers, will herself be murdered before the night’s festivities are ended. His task is to solve that murder after it happens. In order to do so, however, he must first relive the same 24-hour period eight different times while inhabiting the bodies of eight different “hosts” – guests or household staff ranging in age and ability from an elderly butler to a morbidly obese banker to a dogged police constable. Then to complicate matters further, our man also learns that he is in competition with two other would-be detectives, that each of their various incarnations is being stalked by a shadowy knife-wielding assassin intent on thwarting their mission, and that only one of them can, by being the first to solve Evelyn’s murder, escape Blackheath House alive and return to the outside world. As for the rest, they are fated to relive the same day over and over and over again in maddening perpetuity.

Think of it as a mashup of Downton Abbey, Groundhog Day, and Clue. Or is it Quantum Leap, Gosford Park, and Twelve Monkeys? Whatever Turton’s influences, he’s melded them into a Byzantine novel guaranteed to test the wits of even the most avid armchair detective. If, on the other hand, all of this sounds like a recipe for corned beef hash, then pull up a chair. Or better yet, open an Excel spreadsheet, which is the only way you’ll hope to keep track of the dozens of actors – the Ravencourts and Rashtons, the Davies and Derbys, the Sutcliffes and Stanwins – whose secret agendas and murderous manipulations in and around Blackheath House somehow manage to stir not a jot of reader sympathy except, perhaps, for those characters sentenced to relive the book’s clichéd peregrinations all over again.

“I stare at Evelyn’s body and see Michael thrashing in the sunroom and Stanwin’s baffled expression when Daniel shot him in the forest. Peter and Helena, Jonathan and Millicent, Dance, Davies, Rashton. The footman and Coleridge. The dead piling up. How does somebody escape all this?”

Giving Mr. Turton credit where due for audacity, my guess is you’ll be asking yourself the same question long before The 7 ½ Deaths of Evelyn Hardcastle ($25.99, from Sourcebooks) wheezes to its inevitable conclusion.