To mask up or not: The uncivil question dividing the U.S. 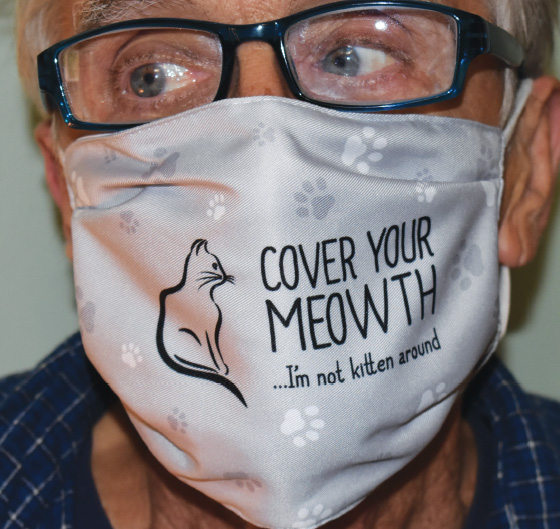 Americans are bitterly divided over climate change, Donald Trump, and race. But the issue that may be causing the angriest debate at the moment is an odd one: masks.

Or, more specifically, facial coverings designed to slow the spread of SARS-CoV-2, the coronavirus.

On its website, the Centers for Disease Control advises people to “cover your mouth and nose with a cloth face cover when around others.” More and more governments around the world are advising people to wear the masks.

But some people dispute that recommendation. Masks can be hot and uncomfortable. They can steam up glasses. People who are vain about their looks don’t want to cover up their faces.

And for others, being told to wear one is a final straw – a sign of governmental overreach at a time when citizens feel their lives are out of their own control.

In the local area, the question has spawned bitter and often downright nasty discussions on a Facebook page called Montezuma County Community, created by the county for the purpose of “connecting a community to work together.”

Arguing seems to be the main activity on the page, however, making it dispiriting to read. On May 30, the page was archived, meaning new posts can’t be put up.

When a man posted a PSA saying, “Wearing a mask in public is a sign of KINDNESS,” it drew a seemingly endless series of comments, many negative. Critics said people who wear masks are “sheep” and that the face coverings are promoted by communists and others as a means of social control.

“Did you wear a mask last year for the flu?” wrote one woman. “Why not? Data shows this virus mimics the flu. Why are you wearing one now?”

However, the coronavirus doesn’t particularly mimic the flu and is considered to be deadlier as well as more contagious.

At least some comments have been moderate in tone. A woman wrote, “Respect is a 2 way street. Just because I don’t wear one doesn’t mean I don’t respect you. Maybe I have reasons I don’t wear it, just like you have your reasons for wearing 1. So we need to respect each other equally.”

But many other comments are less moderate, and the debate rages on, all over social media, both among locals and around the country.

Some people downplay the more than 105,000 deaths that have occurred in the United States by noting the majority of those occurred among the elderly, people in nursing homes, and people with underlying health problems – saying they were going to die soon anyway and it might be a good thing to let some folks go.

In a post on the Montezuma County Community page, one woman wrote, “suit yourself, wear your mask and get your vaccine, sometimes CULLING the herd is a very good thing. Have a great weekend!”

Others claimed the virus is a hoax, or nothing to worry about. However, when Facebook posts on that page said an employee at a Cortez fast-food outlet had coronavirus, that franchise appeared virtually devoid of business for a day.

To wear or not to wear?

The debate leaves businesses in a difficult position. Some won’t let people in without masks; others don’t want customers with masks. And, likewise, many people are saying they won’t go to the places that don’t adhere to their point of view regarding the coverings.

At a time when many customers are still leery about going into public establishments, it doesn’t help to alienate part of your potential clientele.

The efficacy of masks is not universally agreed upon, but they are recommended by numerous researchers and medical experts. In an article written for The Conversation, a website involving academia, research scientist Jeremy Howard of the University of San Francisco wrote that he and 100 of the world’s top academics have recommended that government officials require cloth masks to be worn in public.

Research has shown that the masks reduce the spread of droplets from people’s mouths, and droplets are the way the virus is disseminated. If two people in an encounter are both wearing masks, the chance of infection is greatly reduced.

“There are numerous studies that suggested if 80% of people wear a mask in public, then COVID-19 transmission could be halted,” Howard wrote.

However, the World Health Organization has said that healthy people don’t need to wear face masks and that doing so won’t provide added protection from the coronavirus. “…the wide use of masks by healthy people in the community setting is not supported by current evidence and carries uncertainties and critical risks,” the WHO says on its website.

That seems to contradict what a number of experts are now worrying about: that there are apparently many people who feel fine but nevertheless are actually carrying the virus and can spread it to others without being aware that they have it – like the notorious Typhoid Mary of the past.

Even the WHO website later says, “potential advantages of the use of mask by healthy people. . . include reducing potential exposure risk from infected person during the ‘pre-symptomatic’ period. . .”

The Montezuma County commissioners appear to be skeptical of mask-wearing. They don’t wear masks at their meetings, and Chairman Larry Don Suckla has said he thinks they are “ridiculous.”

But on May 26, Joyce Humiston, president and CEO of C & G Health Care, came before the board and pleaded for the coverings to be used. C & G manages seven skilled nursing facilities in Colorado.

“I hear everyone saying, ‘we don’t have to wear face masks, we have rights’,” she said. “We have rights, yes we do. We also have responsibilities.”

Anyone who goes into someone’s business should have a face mask on, she said, although she noted that the immuno-compromised or disabled may not be able to wear them.

“When I walk into Walmart I have a face mask on and I do it out of respect,” she said, adding that she has been tested three times for the virus but found negative.

“I just want to say to the people listening right now… if our residents can do this and our nursing staff all day long in these masks … It’s just not that big of a deal. I ask my commissioners to support the use of masks.”

Critics say the masks might result in people breathing in less oxygen and passing out, but health-care workers wear masks for hours at a time without such a problem. If a cloth mask isn’t overly tight or thick, getting enough air isn’t a problem, experts say. In many Asian countries, it’s common to see people on the streets wearing masks.

Humiston told the commissioners an employee at the Vista Grande Inn in Cortez, one of the facilities she oversees, recently tested positive for COVID-19.

“We immediately shut down and tested every resident in that building. Every resident tested negative,” she said.

All the employees were also tested, and four more were found to have the virus.

“Four of the five had no symptoms whatever,” Humiston said. “They were younger people. We have people walking around with no symptoms, but they’re carriers of this virus. That’s why they need to wear face masks.”

“One sneeze on the green beans in Walmart is all it takes,” Humiston said.

The five employees that tested positive are healthy and at home quarantining, she said, and all the Vista Grande residents have been tested again.

“We are doing everything in our power to keep it out of these nursing homes and assisted living centers, but we need the community to help us.”

Suckla asked whether the residents of her facilities have to wear masks while alone in their rooms. Humiston said no.

She said she is heartbroken about the economic damage the pandemic has caused and the way that local businesses have suffered. She wants them to reopen, she said, but to do so safely.

“Is a face mask and a little hand sanitizer going to hurt anyone? Does this work? I don’t know. But what if it does work?”

Humiston said an employee at the Cedar Ridge Inn in Farmington, N.M., a nursing home that was owned by C & G but has been sold, worked for Humiston for 18 years.

“She died a week and a half ago of COVID. She fought it for three weeks. I believe she got it at the nursing home and I’m just heartbroken over it.”

Humiston reiterated, “We have the right to not wear a mask, I suppose, but we also have responsibilities and I’m asking you to be responsible.”

She finished by telling the board to “protect the greatest generation. Wear a mask.”