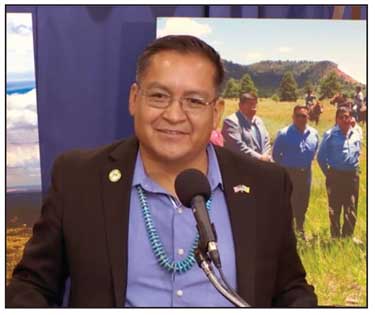 In a surprise development, the Bears Ears Inter-Tribal Coalition says it is pulling out of negotiations with the Utah congressional delegation charged with developing recommendations for a massive public-lands bill.

In a Dec. 31 letter to Utah congressmen Rob Bishop and Jason Chaffetz, the Inter-Tribal Coalition alleges their proposal regarding lands management has been ignored by the county commissioners of San Juan County. They also charge that their ideas were met with a long and callous pattern of disregard from the congressional delegation after it was agreed that the coalition could submit the proposal directly to the Public Lands Initiative, by-passing the San Juan County Commissioners.

At issue is a proposal for a Bears Ears National Monument on 1.9 million acres of land in southern San Juan County.

“In numerous meetings, the tribes put forward compelling, specific reasons for protecting Bears Ears,” says the letter signed by the two co-chairs of the coalition. “But the Coalition never received any responses to the proposal, positive or negative, just continuing delay. This has been a problem with the PLI, which has been consistently plagued by missed deadlines. PLI representatives promised a draft proposal by November 30th, and then guaranteed delivery of a report by December 30th, but the draft report has never been delivered.”

The coalition still has not received any idea of what the PLI intends to do, the letter alleges.

The Public Lands Initiative, begun in 2013 by Bishop, a Republican, has been an ongoing and much-delayed effort to reach a grassroots consensus among a host of differing interest groups about public-lands management in eastern Utah. The impetus for the effort is the pending end of President Obama’s time in office, as it is widely expected he will designate new national monuments under the Antiquities Act. The PLI is designed to avoid unilateral designations in Utah through a “ground-up” legislative approach that has for years been gathering input from local residents and special interests in eastern Utah counties, which contain large swaths of federal public lands.

It was hoped there would be a bill introduced in Congress by last March, according to prior deadlines set by the organizers, but no legislation has been developed yet.

After the many delays, they have had enough, the coalition said in the letter. “Time is of the essence.”

In an email, Fred Ferguson, an aide to Chaffetz, wrote the Free Press, “The letter we received was unfortunate and unexpected. We met with the Bears Ears Coalition on November 30 and created a working timeline that went well into the new year. It was puzzling to see them walk away from the table before we even made it to 2016. As we told the Bears Ears Coalition when we met on November 30, the bill remains in the drafting phase and that the text would be shared before the next meeting. Unfortunately, a meeting did not occur on December 30, so text was not shared. Despite the conflicts on 12/30, we were working with the Coalition to find a new meeting time in January, consistent with the timeline discussed in our 11/30 meeting. Regardless of the Coalition walking away, we remain committed to working with Native Americans that have an interest in land designations and management in San Juan County, just as we always have.”

Pulling out of the legislative process opens the door for the coalition to work directly with the Obama administration, government to government, as the sovereign native tribes seek to protect the Bears Ears region they contend is sacred land.

Tribal interests in the PLI have been represented from the beginning, especially in San Juan County, Utah, where the Native American population hovers slightly over 50 percent and is a key player in discussions concerning the land known by the prominent landmarks resembling its moniker, Bears Ears. Although the initial proposal was developed by the Navajo grassroots organization Utah Diné Bikéyah, the group gained a broad base of support from tribes with historical, cultural and archaeological records of their cultural presence at Bears Ears.

The tribes formally united in July 2015 as the Bears Ears Inter-Tribal Coalition, which now represents the Bears Ears National Monument proposal. The tribes include the Hopi, Navajo, Ute Indian, Ute Mountain Ute, and Zuni tribes, unified by a mission to protect and preserve the region. The proposal is formally supported by an additional 19 tribes as well as the National Congress of American Indians.

It includes a co-management component giving the tribes authority over the administration and supervision of the 1.9 million acres. The 66-page proposal can be found at http://www. bearsearscoalition.org/ where the document clearly details responsibilities, plans for education programs, guidelines for visitors, fuel wood and herb gathering, road and trail access and the role of collaborating federal entities, such as the Bureau of Land Management, and the National Park Service.

The Bears Ears National Monument proposal was submitted by every deadline set by the congressional staff and the San Juan County commissioners over the six-year project. The group maintains that they attended every meeting called by the San Juan County Lands Council to assemble the differing proposals in San Juan County.

Alfred Lomahquahu (Hopi) and Eric Descheenie (Diné), coalition co-chairmen, said they were promised a look at Bishop’s draft bill as early as November so they could compare the two proposals and determine the next steps forward. At a Nov. 30 meeting of the coalition and the PLI, it was clear that the deadline would be missed. The coalition was promised a draft of the legislation at the latest by Dec. 30.

In their letter, the tribes allege they faced outright discrimination from the San Juan County Commission. The commission promised to include the tribal proposal in an non-scientific citizen survey of differing proposals, but then reneged, the letter says.

The coalition’s letter described this as “extraordinary unfairness” and “the kind of raw, heavy-handed political overreaching rarely seen in America today.”

In mid-October, the Inter-tribal Coalition brought its proposal directly to the Obama administration. That move and the simultaneous press conference in Washington, D.C., garnered national attention and support for the monument designation. The coalition is hopeful that the president will grant Bears Ears monument status, but decided to first try the congressional route of the PLI to satisfy recommendations of the Utah delegation.

“Our proposal confirms tribal cooperation and support and is at its core a process of healing, not only for our people, but our land,” stated Zuni Councilman Carleton Bowekaty in a statement.

The letter describes in detail the promises made by PLI staff, the delays and the non-replies to the proposal during November and December, as well as the prior project history with the San Juan County commissioners. All the meetings between the coalition and the PLI congressional delegation included setting timelines for the work needed to complete the final draft bill.

The meetings and deadlines set for the work were numerous and strenuous, including eight in Washington D.C., and, according to the coalition, were conducted in a polite and cordial atmosphere by all in attendance.

“Hopi has been instructed to speak and act with the full authority as a sovereign tribe in order to protect all Tuwakatsi, which includes Bears Ears,” stated Lomahquahu.

In a Dec. 30 meeting the Inter-tribal Coalition discussed the state of the proposal and concluded that the coalition had “no choice” but to discontinue PLI negotiations. Now the tribes will turn to the Obama administration for monument designation.