Climate change could deal a crippling blow to Western trout populations by heating up their coldwater streams, according to a new study — but those same warmer waters could actually help endangered fish like the native humpback chub.

The study, published last month in the peer-reviewed journal Proceedings of the NationalAcademy of Sciences, uses data from nearly 10,000 fish surveys across the interior West, along with climate models, to try to predict the responses of native cutthroat trout, non-native brook trout, brown trout and rainbow trout to climate change. 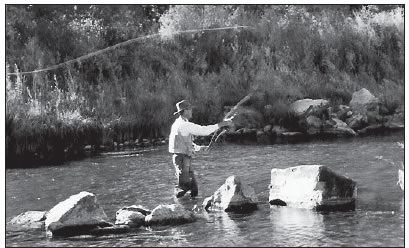 A fly fisherman tries his luck in the Dolores River. A new study says climate change could affect both trout and native-fish species. Photo by Wendy Mimiaga

Lead author Seth Wenger, a fisheries biologist with Trout Unlimited in Boise, Idaho, and his colleagues report that one of their analyses predicts a 47 percent decline in total suitable habitat for all trout.

“We project that native cutthroat trout, already excluded from much of its range by nonnative species, will lose a further 58 percent of habitat due to higher temperatures and competition with other species,” they write.

“Habitat for nonnative brook trout and brown trout is predicted to decline by 77 percent and 48 percent, respectively, driven by increases in temperature and winter flood frequency caused by warmer, rainier winters.”

According to the study, habitat for rainbow trout will decline the least, only 35 percent, because harmful temperature effects would be partly offset by higher winter river flows that benefit the species.

Some models predicted more warming than others, but under even the most optimistic model, native cutthroat-trout populations in the West could decline by 33 percent, the study found.

Cutthroat-trout populations are already in trouble, according to a statement released by the sportsmen’s conservation group Trout Unlimited — some subspecies have been removed from 90 percent of their historic native range and are listed under the Endangered Species Act.

The study’s authors say large declines in trout habitat are likely, but with the early warning from research like theirs, management efforts could be targeted toward key habitats where trout could hang on.

Some such work is already under way. Matthew Clark, the Cortez-based backcountry coordinator for Trout Unlimited’s Sportsmen’s Conservation Project, said his group is working to analyze the upper Dolores watershed to determine the most pressing needs for habitat restoration and protection.

“This is important because cutthroat trout can hybridize with rainbow trout, so it is critical to protect genetically intact populations when they are identified, especially in light of the much-reduced range that they currently inhabit,” Clark said.

Temperature increases by themselves are likely to play a dominant role in future declines of cutthroat trout, brook trout and rainbow trout. But the likely impacts from climate change reach beyond warmer waters, the study authors point out.

Different species are likely to have different responses to flow-regime changes, for example. Fall-spawning trout like brown and brook trout are sensitive to winter floods; the study predicts that if warmer and rainier winters increase flows in that season, those populations will suffer the most. Spring-spawning cutthroat and rainbow trout may actually benefit from higher winter flows, because high water in summer can scour their eggs from gravel nests or wash away young fry. Furthermore, many native trout are threatened by invasions of introduced trout species; brown trout have displaced native trout in much of North America.

The predictions in the study might not be all bad for warmwater natives like the endangered humpback chub. In some parts of their range, such as the Colorado River below Glen Canyon Dam, introduced rainbow trout are predators that hamper recovery efforts.

But Dan Luecke, a Boulder, Colo.-based expert in endangered Colorado River Basin fish recovery, says trout are coldwater species and are found in the upstream reaches of rivers, whereas the Southwest’s endangered fish generally are warmwater species in downstream reaches.

The non-native threats to the native fish tend to be smallmouth bass, catfish, northern pike, sunfish, and other warmwater species that are found in the same reaches as the natives, he said. One interpretation of the new study, he suggests, “is that as the coldwater habitat of the trout shrinks, the warmwater habitat of the listed natives will increase.”

Clark adds that on balance, “Native coldand warm-water species have co-existed across the natural temperature gradient in our Western streams and rivers for millennia. It is ultimately a question of protecting native fish, both cold- and warmwater-dwelling, not a question of trout vs. warmwater natives.”

He said the tailwater fishery below McPhee Reservoir includes an area of overlap between the warm- and coldwater reaches of river, which would be potentially suitable habitat for trout and warmwater species. But it’s a relatively small percentage of the river from McPhee to its confluence with the Colorado.

“Additionally, there are very small numbers of trout that inhabit that zone of overlap,” he said, adding that a much-greater concern is the establishment of invasive, fish-eating smallmouth bass in the lower Dolores that have the potential to share the entire warmwater reach with the native fish.

“Even though the impact of the trout fishery below McPhee is relatively quite small,” he adds, “TU is committed to exploring ways to ensure that the impact is minimized even further while still maintaining a high-quality trout fishery in the coldwater reach below the dam that is unsuitable as warmwater native fish habitat.”

Wenger, the lead author, and Trout Unlimited have been quick to use the study results as a call to action. They point out that by restoring and reconnecting coldwater drainages and by protecting existing healthy habitat largely located on public lands in the West, some of the decline in trout populations can likely be avoided.

“Essentially, Trout Unlimited is already protecting remaining strongholds and restoring degraded habitat — exactly the kind of things that need to be done to reduce the impact of a changing climate on coldwater fisheries in the West,” Wenger said.

“This study validates the work TU is doing in the West and all across the country to protect, reconnect, restore, and sustain trout habitat,” added Chris Wood, Trout Unlimited’s president and CEO.

“It also reinforces the danger in congressional proposals that would remove protection from backcountry roadless areas and cut funding for state and federal natural resource agencies.”