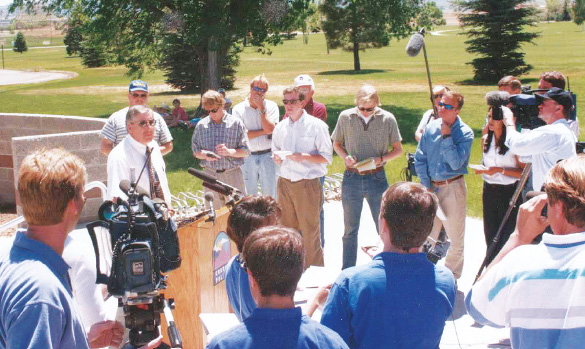 Police and journalists typically have a somewhat contentious relationship. Their desires are often at odds – police want to conduct investigations at their own pace, keeping that information to themselves until they make arrests. Journalists want to obtain as much information as possible in a timely fashion. And so the two sides often clash over transparency and other issues.

Such a clash, however, was never really an issue for us and the Cortez Police Department under the leadership of Chief Roy Lane, who died Dec. 20. He had retired just a few weeks prior, after nearly 39 years as the head of the CPD. He was the longest-serving chief in the history of Colorado.

Hundreds of people turned out in bitter weather for his memorial service Dec. 28 at the Cortez Recreation Center. There were law officers from police departments and sheriff ’s offices around the region, as well as many, many local citizens who appreciated the dedication, professionalism, common sense and even humor Lane brought to his position.

As journalists, we appreciated him, too.

We called him fairly frequently over the years, usually when there were incidents we needed more details on than what was in the public reports. Lane was very diligent about returning our calls and answering questions. He didn’t always give us everything we wanted, but truly the Cortez Police Department has been a model of transparency and friendliness in its dealings with the press. (The Montezuma County Sheriff ’s Office has also generally been quite good.)

It was always a pleasure to talk to Lane. He was courteous, patient and low-key, and he didn’t grumble about our calls, but greeted us with friendliness.

He seemed to be everywhere in the city. When he wasn’t at the police department, he was likely in a meeting. He sat through nearly every city council workshop and meeting. Not because he was required to or because there was always something on the city’s agenda relating to new liquor licenses or other police business. He just showed up, making himself available in case any questions arose that he could address.

He showed kindness and tolerance for the unfortunate, even those who caused problems. He served on the board of the Bridge Emergency Shelter from its very beginning.

M.B. McAfee, who helped start the shelter and served on the board with him, said, “In the 10 years that we worked together I don’t think he missed more than 10 meetings.”

Law-enforcement work is difficult. Officers have to deal with people who may be dishonest, high on drugs or alcohol, down on their luck, needy, angry, or depressed. This requires a great deal of patience and tolerance. Under Lane, the CPD has shown such traits, particularly in dealing with the people often found in the city’s parks.

“His officers always treated our guests at the Bridge shelter with respect and dignity,” McAfee said. “And I considered this a reflection of Roy’s training. I think it was an exquisite honor to have known Chief Lane.”

Police work is also dangerous. This was never made clearer than in June 1998, when three local men stole a water truck in Ignacio and then gunned down and killed Cortez Patrol Officer Dale Claxton, who had spotted them in the stolen truck as they were heading south on Road 27. The fugitives also shot and seriously wounded two sheriff ’s deputies before fleeing into the wilds on the Colorado-Utah border.

The tragic death of one of his own officers deeply affected Lane, and he always spoke of it with somberness.

The manhunt for the three men went on for weeks, and in the first days Lane gave two press conferences a day, standing at a podium in front of the police department. Reporters from state and national media swarmed around, barraging him with questions and sometimes elbowing us local journalists (David Long and Gail Binkly; we were then working for the Cortez Sentinel) out of the way.

After the big conferences were over, Lane often would quietly invite us into his office to ask any additional questions we might have. “Those other people will be gone soon,” he said, “but you will still be here.” For someone to think about such a consideration at so difficult a time was remarkable, but it was typical of him.

We will miss Roy Lane – from his Texas drawl to his amused chuckle to his way of making us feel at ease over the awkward questions crime stories often entailed. We, among a host of others, were proud to consider him a friend.

Four decades of his leadership – both in law enforcement and community involvement — have set a high bar for those who follow.