Domestic violence creates a world of hurt, from the obvious and ugly physical wounds and scars to the more subtle psychic ones. Its victims are degraded, diminished and demeaned, given a clear message they are of little or no value and incapable of caring for themselves in an uncaring universe.

For those ready and courageous enough to get out of such a relationship, the first step is often finding shelter – a place to live. 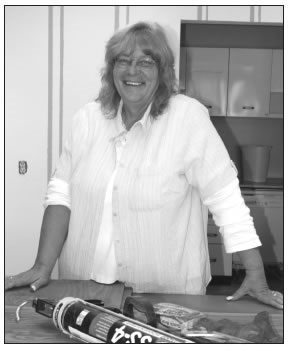 Cheryl Beene, executive director of RENEW, is excited that a domestic-violence safehouse will soon be opening in Cortez. Photo by Wendy Mimiaga

In Montezuma County that’s where RENEW will soon be stepping in.

Starting next month, the women’s advocacy group will be providing such a shelter with the opening of WINGS, a five-bedroom safehouse that gets its name from the acronym of Women In Need Gaining Strength. RENEW helped more than 500 families last year in Montezuma and Dolores counties, said Executive Director Cheryl Beene, and fielded more than 2,200 calls on its crisis hot line. Its other functions include supporting domestic-violence victims in court and providing information and referrals to other agencies for help.

Currently women trying to get out of an abusive relationship have the option of going to the Southwest Safehouse in Durango or other regional shelters, but many local women don’t want to relocate, Beene explained.

Additionally, relocating can mean isolation and the severing of whatever social relationships they do have.

“There’s a large percentage of our population that was born and raised here, so to leave and go to Durango or Bayfield or even further — Alamosa or Montrose — that’s asking them to go into a situation very similar to what they’ve just left — of being without family, friends.

“What we have been doing is providing one or two nights in a motel, but with limited funds that doesn’t give anybody enough time to explore their options and figure out what is the safest thing for them to do.”

Too often, she said, the result is that the victims return home.

She said a national survey several years ago showed that it takes repeated attempts — “from seven to 10 times of a victim leaving before they actually get it done.”

Batterers are usually men, their targets women, but not always.

So far, the problem of men seeking shelter from an abusive relationship has been handled on a case-by-case basis because the situation has been rare — just three instances in the six years Beene’s been with RENEW.

The length of stay at a safe house varies. “Some people will go only for a few days if they’re waiting for a protection order so they can go back to their homes,” she said, while others may stay for one to three months while they are finding jobs and permanent places to live.

Domestic violence runs the gamut in severity from pushing and slapping to punching and strangling, but it goes beyond physical abuse.

“There is always verbal and emotional abuse as well,” Beene said.

There is also what Beene termed financial abuse, “controlling all the money in the home, even making her work and controlling that money.”

Domestic violence also often includes the abuse of family pets, as an example of what can happen to the human victims.

“It’s saying, ‘You’re no better than that dog.’ If he’s abusing animals, he’s probably abusing someone in that household.”

Beene discourages the use of the term “victim” for persons who have experienced domestic violence and are working on making changes.

“Once they come here to our agency, that’s the first step away from being a victim,” she explained.

“It’s a psychological thought process for them — I’m not a victim any more and I’m going to participate in my future. These are my decisions.

“We’ll never make a decision for them — all we do is provide options and they get to make the decisions. Often it’s the first time they’ve been able to do that in a very long time.”

Funding for RENEW comes from “a unique combination of federal, state, local and private foundations,” she said, along with individual contributions and occasional fund-raisers.

WINGS will be staffed 24 hours a day, will have multiple security systems to ensure the safety of its clients, Beene said, and is quite cozy.

“This isn’t Club Med, but it’s a very comfortable situation,” she said, with a full kitchen, living/dining room area, a handicapped-accessible bathroom and a patio outside as well as a play area for the kids.

The house is located close to local law-enforcement agencies, with a response time of less than a minute. It will be staffed by both paid personnel and vounteers. “We figure between the office and the safehouse it will take five staff,” she said.

RENEW works closely with other local agencies to provide a network of services to help woman gain and maintain control of their own lives.

“We can do employment education and budgeting and finance-management through the Piñon Project,” she said. “They actually come and get these women and take them to these classes, and they have parenting classes to help the non-violent parent teach their children to be non-violent.”

Having domestic-violence charges dismissed in court because of insufficient evidence or the victim refusing to testify is becoming less common than in years past, Beene said.

“Our law-enforcement agencies have really stepped up to the plate and trained officers in doing a proper investigation up front — getting the pictures, getting that outcry statement so the DA has enough to go forward, even if the victim does recant or disappear.”

WINGS will be opening in October, which is also National Domestic Violence Awareness Month. Been said the safehouse is pretty well fixed as far as furniture and other essentials, but cash donations are always needed and can be made through the Dolores State Bank, or mailed directly to P.O. Box 169 in Cortez.